A refreshing exploration of Ritter Island

Waterfalls and prolific foliage are not what most people think of when they visit the Magic Valley. But hidden within the desert landscape exists the serene and beautiful Ritter Island Unit of Thousand Springs State Park.

Idaho Conservation League staff visited the area to spend a day filled with breathtaking beauty and a fruitful landscape that is home to many birds, aquatic life, and other animals. It’s a place where dark and ominous walls of basalt surround you physically while the sound of cascading waterfalls dominates your auditory senses. Thousand Springs State Park’s Ritter Island is a special place where everyone should be able to retreat for a quick and restful getaway.

As we stood there gaping at the expansive basalt walls towering over us, everywhere we looked our eyes locked on a multitude of springs – we even found new springs we hadn’t noticed a second ago. The crystal clear water shimmering down these walls leaves the Eastern Snake Plain Aquifer (ESPA), makes its way down the channel between the parking area and Ritter Island, and then connects with the mighty Snake River.

As we prepared to stand up paddleboard, a gentle vegetal scent enveloped the air as we heard the chattering of Canada geese, burbling waterfalls, and the humming of the nearby power plant. We cast off and entered the crystal clear waterway where bright green vegetation and colorful rocks of grey and red hues covered the river floor. The morning was slowly beginning to warm up for the hot day ahead, we found that the cold, crisp, and invigorating water was incredibly welcoming. 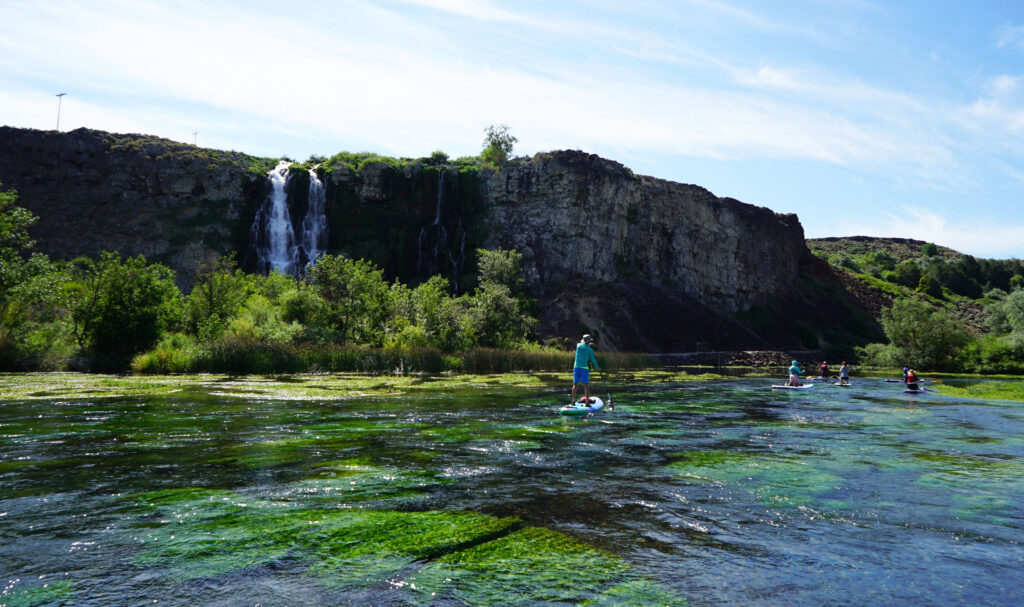 From our launching point at the parking area, we were able to see a double waterfall from afar. But it wasn’t until we paddled closer that we were able to see how impressive it truly was. There, in the middle of an arid desert, was Lemon Falls, a double waterfall plunging to the earth from the basalt. While gazing at these falls, no less than 30 American white pelicans soared above the cliff’s edge with their 9 foot-long wingspan, muskrats and minks swam from shore to shore, and redwing blackbirds chirped their distinct song. We were surrounded by so much life at the confluence of the Snake River and ESPA springs.

Our adventure continued to a shaded area off of Ritter Island encompassed by Russian olive trees. As we cooled down in the shade and refueled, there was a sense of gratitude amongst us – not only for the adventure with each other but for the natural world as well.

The legacy of Minnie Miller

From the island, we could see the last major waterfall in the park – Minnie Miller Falls. What sets these falls apart is the way in which they leave the aquifer – directly out of vegetation with a variety of springs making up the falls as a whole. We jumped back on our SUPs and paddled past Minnie Miller Falls, where we again found ourselves gaping at the sheer amount of water flowing from the hillside. 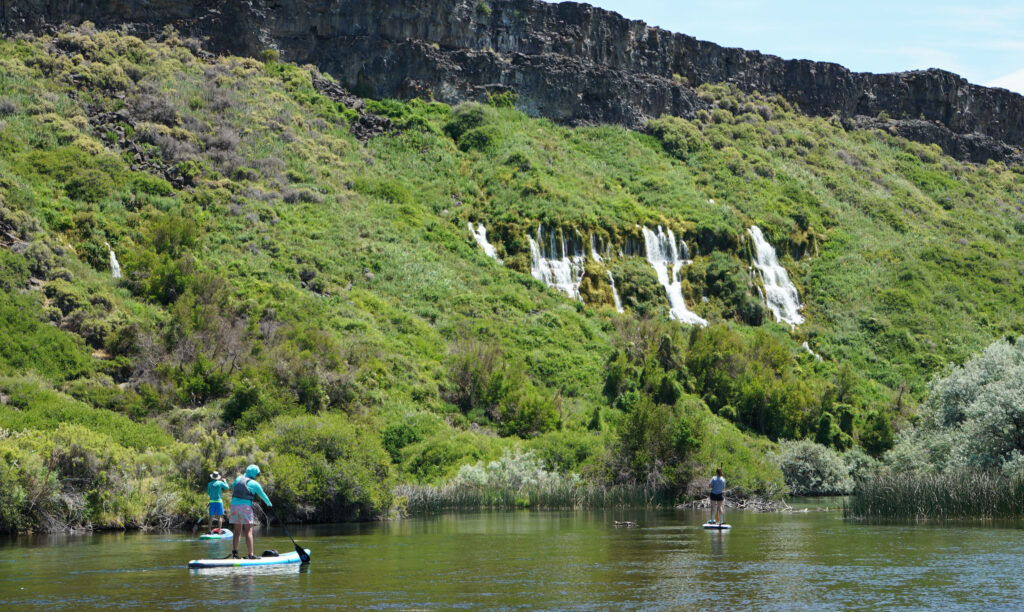 Ritter Island was once home to Minnie Miller, a Guernsey cattle breeder and unusually independent businesswoman of her time. It was also the site of the Payne Lewis Ferry, which provided safe passage for pioneers who trekked along the Kelton Trail.

When we neared the end of our adventure, we returned back to the cleaner water where we could dunk ourselves to cool down from the excessive early-season heat. Upon our arrival, we were greeted with dozens of visitors taking advantage of the crisp and clean water coming from the springs. Who were these individuals? Recreationalists making lifelong memories in the waters of the springs of the Eastern Snake Plain Aquifer, as many of us have done throughout southern Idaho’s history. From Lemon Falls to Minnie Miller Falls and beyond, these springs have provided lifelong memories for many southern Idaho residents. 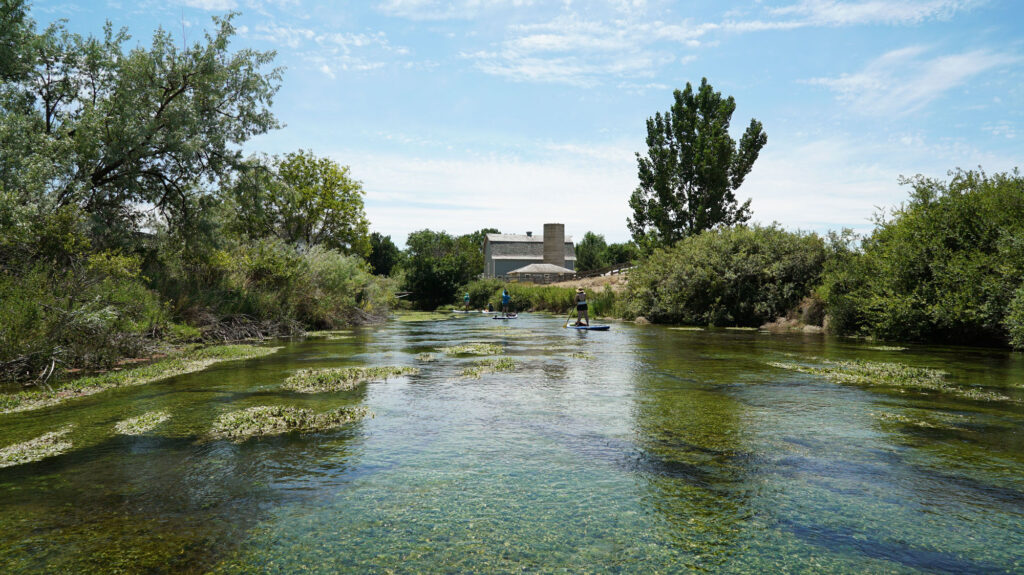 As the Snake River moves across the state, it becomes increasingly contaminated with excess nitrogen and phosphorus from fertilizer, animal waste, and other sources. Year after year, reports are finding elevated levels of these contaminants, with very little being done to minimize agricultural impacts.

Not only that, but the ESPA that creates the springs we were surrounded by are at risk as well. With continuous droughts in the region, aquifer water levels are expected to continue to fall while contaminated groundwater continues to rise. This imbalance creates the potential for high concentrated levels of pollutants in our groundwater. And that threatens the quality of drinking water for hundreds of thousands of Idahoans who live in southern Idaho.

As we stood there, on top of the water, we were left wondering what happens if this contamination continues? What happens to natural treasures like this?

The Snake River is the lifeline of southern Idaho. Commonly thought of as a “working river,” it provides irrigation water to 2 million acres of agricultural operations. From crops and dairies to fish farms, the Snake River provides life and sustenance to pivotal Idaho industries. Beyond that, many anglers, boaters, hunters, and hikers all have memories of exploring this vast river system. It is, in a sense, a part of the southern Idaho identity, not to mention public health, which are at risk if measures are not taken to stop river and aquifer contamination.

We all share the responsibility to address the issues occurring in the Snake River and its aquifer. Our long-term goal at ICL is to make the Snake River safe, swimmable, and fishable again. We need to work together to ensure that places like Thousand Springs State Park stay safe and clean for future generations.

Take Action! Use your voice to tell Idaho’s decision-makers to support Rep. Simpson’s proposal and work towards restoring the Snake River.

Plan your own adventure to Ritter Island.