A siege on Idaho’s salmon stronghold

For decades, the Middle Fork of the Salmon River has been Idaho’s stronghold for wild salmon and steelhead. One of the eight original National Wild and Scenic Rivers designated in 1968, the Middle Fork lies in the heart of Idaho’s wilderness, and has not been substantially altered by humans. There are no hatchery programs in the Middle Fork, making it one of the last true sanctuaries for wild, native fish anywhere in the continental United States. 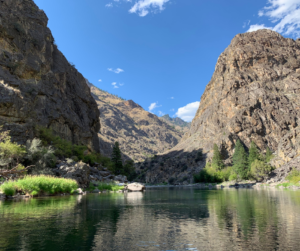 In spite of its wild setting, the Middle Fork is one of the most studied rivers in the region. For nearly 75 years, state, federal, and Tribal agencies have surveyed the river for salmon and their nests, called redds. When these counts started in the 1950s and 1960s, survey methods and technologies were less sophisticated than today. Idaho’s famed early fish biologists waded the Middle Fork and its tributaries to count redds, using planes to augment their surveys and provide additional data for the wildest parts of the watershed.

Modern-day fish biologists have combined these historical counts to estimate that the Middle Fork and its tributaries supported 24,000 Chinook salmon redds each year back then. Given the tendency for each female Chinook to create only one redd, and the 1:1 ratio of males to females, that means 48,000 fish were returning to the Middle Fork each year!

Since then, surveys have continued, techniques have improved, and concerns for fish have grown. Now, biologists go by foot, plane, and helicopter to survey the entire 400+ miles of salmon habitat in the Middle Fork watershed. Unfortunately, Chinook and their redds are getting harder to find. In 2021, only 362 redds were counted in the entire basin. That’s 1.5 percent of what was present in 1950. This is not the case of one bad year, either. Since more robust counts began in 1995, the Middle Fork has averaged 722 Chinook redds per year: 3.2 percent of what was there only 75 years ago. In each of the past five years, fewer than 500 redds have been counted. 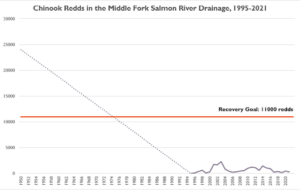 Many factors impact salmon populations, but in the case of Middle Fork Chinook, the story is simple. The Middle Fork is a pristine habitat that does not limit salmon spawning. In fact, biologists think the watershed could support as many as 92,000 redds. The lack of hatcheries means hatchery fish can’t be at fault, either.

The only remaining factors are harvest and downstream hydroelectric dams. Fisheries agencies estimate that harvest in the ocean and lower river kill one in ten fish, so harvest is clearly not the primary cause of decline.

The most  significant impact on these salmon populations came in the late 1960s and early 1970s, when four dams were built on the lower Snake River. Fish counts from that time period show a significant decline after the last of these dams was completed and that trend has continued into the dire state of Middle Fork Chinook today.

Looking at Chinooks’ life journey from start to finish is helpful in understanding what’s needed to ensure their survival.

Middle Fork Chinook salmon are born in rivers and streams. As juveniles, they travel down the Salmon River, Snake River and the lower Columbia River to get to the Pacific Ocean. About half of them die on their way. More perish because of the cumulative stress of the harrowing journey. The ones that do survive spend two to five years in the ocean before following the same pathway back to Idaho to spawn. Even more get lost in the reservoirs on their journey home. Although a salmon stronghold awaits Chinook in Idaho, the road to get there is decimating them.

How do we fix it? 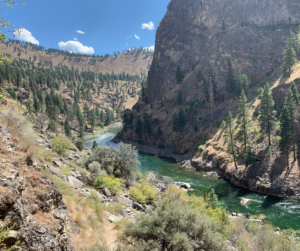 If we make that road less dangerous, salmon will flourish once again in Idaho. Breaching the four dams to create a free-flowing lower Snake River could bring 50,000 fish or more back to the Middle Fork of the Salmon River, Idaho’s heart.

Salmon hold more than just a place in our rivers. They are deeply rooted in our identity as a state, ecologically, economically, culturally, and historically. Ensuring a future for this iconic species is vital to maintaining that identity.

2022 is the year for salmon. Take action today to let Northwest leaders know that now is the time to safeguard Idaho’s keystone Chinook salmon.

Beginning February 16, 2022, ICL will be kicking off its bi-monthly ICL Salmon Club workshops in both Ketchum and Boise. ICL Salmon Club volunteers will utilize time each meeting to mobilize efforts through creativity and action for wild salmon and steelhead conservation. We will meet with the ICL salmon team and the Youth Salmon Protectors to collaborate on ideas, events and projects!

If you are interested in joining ICL Salmon Club to fight for Idaho’s salmon and steelhead, fill out this form and mark your calendar.

This is the year for salmon recovery! We look forward to taking action with you!