A Voice for the Mountains

Editor’s note: This post is authored by one of ICL’s 2018 volunteer wilderness stewards, Emily Williams. A  recent graduate of Tufts University, Emily  was born and raised in Idaho’s  Wood River Valley.

Are you prepared to go into the wilderness? Do you have a first aid kit? Sunscreen? Space blanket? Do you know the seven Leave No Trace (LNT) principles? Are fires allowed? Are dogs supposed to be on leash? Preparedness for a trip into the wilderness means more than you might think.

Personal safety is paramount, but knowing how to minimize the impact of your physical presence in the wilderness is almost equally important. It’s easy to pack up for a trip without considering the impact of your travel – how you’ll pack your trash out, or how far away from the stream you need to "go." But understanding the rules of the backcountry is incredibly important. They exist to protect and preserve these places for your own next visit, and for anyone else who might want to come and see the same place in the same – if not better – state that you were able to experience. 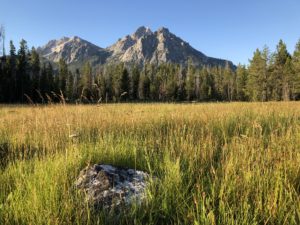 As they enforce regulations, U.S. Forest Service wilderness rangers act as the voice of the mountains, the streams, the prairies, the grasslands and the countless other landscapes that dot the American wilderness. Unfortunately, there are only three backcountry wilderness rangers allocated to Central Idaho. The Idaho Conservation League’s volunteer wilderness stewards are in place to act as an extension of the wilderness rangers’ voices. There are over 60 stewards in the program this year.

I caught up with a few of the first-timers, to find out how their inaugural season was going, what had changed and what they’ve learned thus far. First-time steward Barry Miller wrote, "The most unexpected (part of the job) is receiving the weekly map of reports and seeing how little of the SNRA is being patrolled even with the seemingly large number of stewards. Once I’ve visually seen how little is getting covered, I’ve realized how miniscule the effectiveness is of the three wilderness rangers on that same area." The importance of the stewards being out there cannot be overstated. With each ranger responsible for patrolling an estimated 233,333 acres they can use the help the stewards provide. 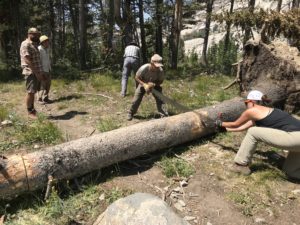 So far this year the stewards have:

And they’re only halfway through the season!

Describing the biggest lesson that she’s learned so far, another first-time steward Kathleen Krekow mentioned, "A little effort goes a long way. There is nothing like a day of “working” outside and on the trail (or off it too!), and while there  may not be a lot to show for the time spent (part of the point!), there is something very rewarding about deliberately minimizing our impact on the places we travel through while making a conscious effort to connect with people along the way."

David Hoversland, first-time steward and recent Idaho transplant, added, "It is up to all of us to be respectful to the natural environment and considerate of other visitors. Following the seven LNT principles is paramount to protecting backcountry areas."

These three stewards got interested in the program because they value the amazing access we have to the backcountry here in Idaho. By being involved in the program, they are able to give back and protect the places they love. They’re able to, as Kathleen so beautifully put it, "give back to the places that give so much to us."

After spending the past 10 weeks as part of the stewardship program, I asked what they would tell trail users if they could only tell them one thing. Barry’s resounding response was to, "Enjoy the solitude and walk lightly on the land." 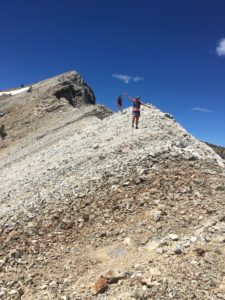 If you’re interested in becoming a wilderness steward, get in touch with Betsy Mizell, and we will reach out to you in the Spring when the application process opens.