Action-Packed Week at the Statehouse

Votes are coming fast and furious at the Statehouse, we had a great legislative reception, and are excited to see some positive momentum in Idaho’s State Capitol. We also saw some measures come to a screeching halt. Keep an eye on our bill tracker for all the news on issues that we don’t cover below, like HOV lanes, pesticides and Exploding Targets, oh my!

The 5-year saga over science standards has been long and complicated. While we’re happy to see them approved, the Senate also established an interim committee to study the standards issue and bring recommendations back to the 2021 session.

So, despite the fact that we’ve dragged the Science Standards back and forth across the rotunda for 4 out of the last 5 years, we’re gonna have to do it some more. Here’s to hoping at some point, legislators can move on and allow educators, administrators and parents to start focusing on students.

Last September, a group of prestigious ornithologists and researchers published a massive study in the journal Science that found that bird populations across North America have declined by over 30% since 1970. That amounts to more than 3 billion birds that have disappeared from our skies.

The decline of many once common species like larks, kingfishers, swallows and sparrows is striking and cause for concern. On the other hand, the study found that some species, like raptors and waterfowl have actually increased, largely as a result of human intervention; we banned DDT and conserved wetlands and flyways for ducks and geese.

That’s why we were happy to see the Senate unanimously approve Sen. Dan Johnson’s (R-Lewiston) resolution, which spotlights the importance of birds to Idaho’s economy and our ecosystems. The resolution calls on the Idaho Department of Fish and Game (which has a duty to conserve all species) to work with other agencies and partners to better understand the causes of decline, its implications, and restoration needs for our feathered friends. The measure moves on to the House Resources Committee where we expect a hearing within a couple weeks.

After failing last week in the House Resources Committee, the Public Access Protection Act (PAPA) had better luck across the rotunda. With the help of Sen. Fred Martin (D-Boise), the bill was introduced by the Senate Resources Committee. The bill would provide citizens with the right to challenge illegal posting of public lands. Currently, only county sheriffs have authority to issue citations.

Now the question is: Will Chairman Lee Heider (R-Twin Falls) give PAPA a hearing? Sign the Idaho Wildlife Federation’s petition and add your voice to the chorus of public land lovers who agree that it’s wrong to illegally block access to public lands.

Hitting the Brakes on EVs

Last week, we had success on Energy Efficiency Building Codes and Electric Vehicles (EVs). But this week, the Senate shifted into reverse by rejecting a voluntary, non-binding resolution that simply encouraged the Idaho Building Code Board to consider Electric Vehicle (EV) charging infrastructure as a component of future revisions.

While we’re disappointed they slammed on the brakes, we (and automakers and utility companies) know that EVs are the future. The longer we delay implementing forward-thinking measures to prepare for the coming EV revolution, the more it will cost everyday Idahoans, like you and me.

Rep. Paul Shepherd (R-Riggins) introduced a measure that would strike the requirement to avoid a political imbalance on the Idaho Department of Fish and Game (IDFG) Commission.

When a 1938 citizen’s initiative established the professional management of wildlife via the IDFG, it was overwhelmingly approved because Idahoans saw the negative effects of political influence over fish and game management. The establishment of the IDFG commission allowed a maximum of 4 (out of 7) commissioners from the same political party.

By the way, the bill comes on the heels of the resignation of IDFG Commissioner Bradley Melton, freeing up a seat from the Clearwater Region. If you’re interested, throw your name in the hat!

In other fish-related news, yet a third memorial was introduced by Sen. Mark Harris (R-Soda Springs) that supports dams on the Columbia and Snake rivers, this one still misses the mark and continues to undermine ongoing dialogue to address the needs of agriculture, transportation, reliable and affordable energy, local communities and businesses, and endangered salmon. 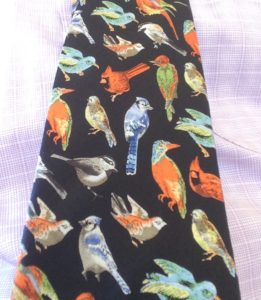 The Tie of the Week (TOTW) shouldn’t need much explanation! Thanks to Sen. Johnson and the Senate for their endorsement of the Bird Resolution. Now it’s flying off to the House.