An Update on the Thompson Creek Mine in Central Idaho

In March 2020, a magnitude 6.5 earthquake jolted residents of central Idaho – the second largest seismic event in the state’s recorded history. In the immediate aftermath of the quake, the first thought of many ICL’s staffers was, “Is the Thompson Creek tailings dam still standing?” Looming just a few miles from the Salmon River, the 600-foot-tall sand dam holding back mine tailings at the Thompson Creek molybdenum mine near Challis can seem like an environmental catastrophe waiting to happen. Luckily, that earthquake did not result in any damage to the dam or the release of hazardous materials (see our April 2, 2020 blog post for a full recap of that event). However, that event did serve as a potent reminder that this area of central Idaho is quite seismically active and that the engineering specifications of the original tailings dam may not be sufficient given our current understanding of the area’s seismic hazard. 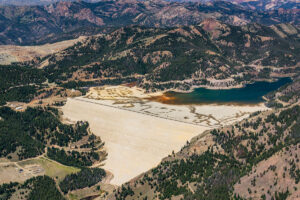 In the aftermath of the M6.5 quake, ICL sent a series of letters to the mining company (Centerra Gold) and the task force of state and federal agencies that oversee the site. In our communications, we requested that Centerra establish an independent tailings review board to provide additional oversight. We also requested that they reassess the seismic hazard on site and increase the stability of the tailings dam depending on their findings.

To follow up on those requests, several ICL staff and board members had the opportunity to tour the mine site last month with representatives from Centerra and the Bureau of Land Management. Our primary objective for this tour was to get up to speed on the latest happenings on-site and continue to advocate for heightened oversight and engineered stability at the tailings dam. On the tour, we learned that:

While we are encouraged by the changes made in response to the increased seismic hazard at the site, ICL will nonetheless continue to serve our long-standing ‘watchdog’ role concerning the Thompson Creek Mine and hold the company to the highest safety standards possible for their tailings dam.