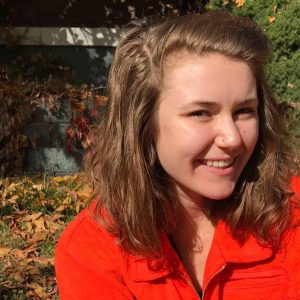 Volunteer stewards rose to the challenge of returning Central Idaho’s wilderness and frontcountry to pristine condition during a summer of heavy impacts from visitors who flocked outdoors to find solace during the global pandemic. We are proud to highlight three projects that ICL’s volunteers participated in to enhance and restore Central Idaho’s public lands.

With record numbers of campers and hikers recreating in Idaho’s central mountains this year, volunteers in ICL’s Wilderness Stewards Program have been hard at work across the region, from the Cecil D. Andrus-White Clouds Wilderness to the Lost River Range to Craters of the Moon. 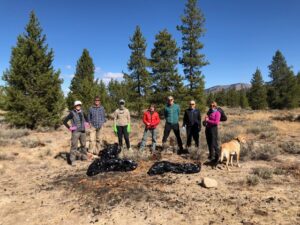 Stewards clean up trash, naturalize campfire rings, report data to the U.S. Forest Service, and educate the public on wilderness ethics and how to leave the landscape better than they found it. Our stewards broaden the Forest Service and National Park Service’s reach and have played a crucial role in maintaining Idaho’s wilderness areas since the program launched in 2016. In 2020, the wilderness stewards clocked 3,161 volunteer hours, cleaned and destroyed 113 illegal or overbuilt fire rings, extinguished an abandoned campfire, and addressed over 30 instances of improper human waste disposal.

This year’s crew of wilderness stewards faced real challenges – earthquake aftershocks, parking lots at trailheads overflowing with cars and trucks, illegal fire rings scarring once-pristine meadows, and large groups of hikers that exceeded the maximum group size for wilderness travel. Still, the stewards went above and beyond to make a difference for Idaho’s wildest places.

The impacts to the Sawtooth National Recreation Area (concentrated at popular areas in the Sawtooth and White Clouds Mountains, such as destinations accessed from Iron Creek Trailhead, Fishhook Creek Trailhead and Fourth of July Trailhead) were so severe that ICL’s stewards and U.S. Forest Service staff needed all the help they could get.

After witnessing the harmful impacts on the landscape firsthand, Susan James, the Recreation Program Manager for the SNRA, called upon various organizations that work in partnership with the Forest Service, including ICL, the Sawtooth Society, National Forest Foundation, and the Sawtooth Interpretive and Historical Association. James said, “Knowing we needed help, I reached out to our partners. They jumped at the chance to join forces, and in only a few week’s time, pulled off one of the biggest volunteer projects we have ever had!” 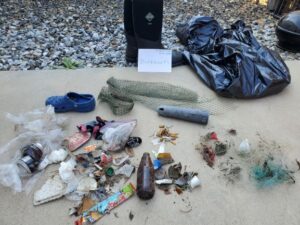 More than 130 volunteers took to the SNRA between September 19 to October 4. Collectively, they logged a total of 909 hours of work, rehabilitated 150 campsites, disassembled 320 overbuilt fire rings, and disposed of 123 instances of human waste. In addition, ICL, NFF and the Sawtooth Society contributed funding for an Idaho Conservation Corps youth crew to thoroughly rehabilitate campsites, roadways and travel routes around the headwaters of the Salmon River and Alturas Lake. The crew cleaned approximately 96 sites and 50 miles of road and expanded their effort to the high-use area at the inlet of Redfish Lake.

Thanks to the impressive and inspiring accomplishments of these volunteers and the coordinated efforts of the community partners, this cleanup initiative marks the first of what will hopefully become an annual fall tradition in the SNRA. 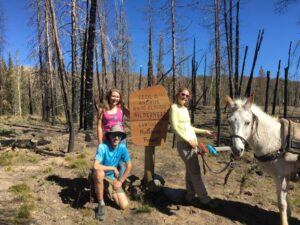 During August and September, teams hiked with these signs and replaced or installed them at five different locations along the wilderness boundary. Among other places, Antz Basin Divide and Chamberlain Divide, two of the busiest entry points into the Cecil D. Andrus – White Clouds Wilderness, now have beautiful wooden wilderness signs signaling the boundary!

A Big Thank You to All Our Volunteers

While this summer’s unprecedented, damaging impacts to Idaho’s wilderness have certainly been disheartening, ICL’s wilderness stewards, community partners and clean up volunteers united in service to a wild Idaho that so many have worked tirelessly to preserve for future generations.

Kudos to all the volunteers who made a difference for Idaho’s spectacular public lands this year!