Simpson’s Initiative calls for breaching four federal dams on the lower Snake River so many more Idaho salmon can survive their 1,800-mile round trip migration to the Pacific Ocean and back. The Initiative also proposes comprehensive investments in Northwest clean energy, transportation, and water infrastructure. 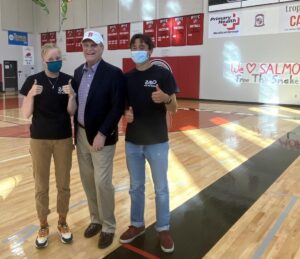 “We’ve been educating ourselves and our classmates about the salmon extinction crisis. We want Idaho’s (and other Northwest) leaders to make the changes needed to save our salmon, and it was inspiring to hear from Congressman Simpson that our voices are being listened to,” said Associated Student Body President Elizabeth Duke-Moe, who helped organize the postcard drive. “We will build on this momentum, maintain the pro-salmon activism at Boise High and expand to other high schools.”

According to widely accepted science, removal of the four dams is the only way to prevent these wild fish, which once numbered in the millions in the Snake River Basin, from going extinct. Students learned about the salmon issue in their biology, government, and environmental science classes and decided to take action. Especially motivating was the fact that salmon are a keystone species so the health of the ecosystem depends on their survival.

Quinten Carney, a member of the Boise High Green Club who was also involved with the project, wants to engage more students. “This is really an issue that a lot of kids care about,” he said. “You only have to talk to your grandparents who remember seeing these beautiful fish every year in huge numbers to understand how important salmon and steelhead are to Idaho. Entire ecosystems depend on these animals.”

The Green Club organized a watch party of the Andrus Center’s Energy, Salmon, Agriculture, and Communities: Revisited Conference in May. Congressman Simpson gave the keynote address. Many students attended and learned about the science and politics of Idaho salmon and steelhead.

James Byrne was struck by the immense scale of Simpson’s framework. “Congressman Simpson’s proposal is comprehensive. It’s about lots more than fish conservation,” Byrne said. “It’s about clean energy. It’s about transportation. It’s about small business. It’s about reimagining the way Idahoans interact with the river.”

As Congressman Simpson pointed out to the students assembled in the Boise High School gymnasium decorated with pro-salmon banners and posters, “People are afraid of change. It’s going to take a lot of conversations to make this happen.” These students have taken his words to heart and are actively engaging friends, family, neighbors, and others to have these conversations to make people less afraid of necessary change.

If you would like to get involved with saving Idaho’s wild salmon and steelhead, we encourage you to call or write to your elected officials, not only in Idaho but also in Washington and Oregon, to urge them to support the Columbia Basin Initiative.

– Shiva Rajbhandari is the Idaho Conservation League’s Youth Engagement Coordinator and the leader of Youth Salmon Protectors. He is entering his junior year at Boise High School.