Earthquake rattles Central Idaho…and a dam above the Salmon River

On March 31, 2020, while residents of Central Idaho sheltered-in-place due to COVID-19, a magnitude 6.5 earthquake hit northwest of Stanley in the Salmon-Challis National Forest. This was the second-largest ever recorded in Idaho, trailing only the 1983 Borah Peak earthquake (magnitude 6.9) that killed two and resulted in millions in damages. Luckily, reports indicate that the region was spared significant damage and personal injury from the latest quake.

The quake was centered only 32 miles west of the Thompson Creek Mine, a large molybdenum mine near the community of Clayton.

The Thompson Creek Mine is one of the largest molybdenum mines in the world, spanning 3,000 acres nestled in the mountains above Idaho’s renowned Salmon River. Mine production began in 1983, and since then, in addition to the ore produced, over 100 million tons of processed mine waste has been generated at the site. The sand-sized waste materials after the ore is extracted are called tailings. 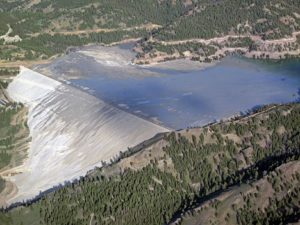 Much of this mine waste is stored in a canyon and held back from the Salmon River watershed by a 600-foot-tall sand dam. These tailings and waste rock contain toxic compounds and require permanent treatment to protect water quality downstream.

We have been tracking the Thompson Creek Mine and tailings dam for decades. ICL staff have visited the mine site on numerous occasions and seen the full scope of the disturbance from the air (click here for a flyover of the mine site and here for a video mine tour with ICL’s John Robison, both courtesy of our partners at EcoFlight).

According to analyses by the U.S. Forest Service and Bureau of Land Management, the tailings facility at the Thompson Creek Mine is designed to withstand an earthquake up to magnitude 6.5, which is equal to the earthquake we just experienced. The Forest Service and BLM have previously stated that the stability of the sand dam is not an issue, and preliminary reports from Thompson Creek Mining Company and the State of Idaho suggest that no problems have been identified.

This recent earthquake reminds us of the vulnerability of the Thompson Creek Mine sand dam. This issue has been highlighted before. Even if the likelihood of a catastrophic failure may be relatively low, the human and environmental costs of a collapse would be extremely high. If the sand dam were to liquefy and breach during a large-scale seismic event, it would lead to a release of millions of tons of toxic sediment into Bruno Creek, Squaw Creek and the Salmon River (less than 10 miles away), putting human life at risk. Tailings could also smother the creeks and the critical habitat they provide for endangered salmon, steelhead and bull trout.

Tailings dam failures occur throughout the world with alarming frequency and with sometimes catastrophic results. In May 1997, tailings dams failed at the Talache mine complex in Atlanta, ID, releasing a toxic slurry of arsenic, lead, mercury and other contaminants. Tailings dam failures in the past years at the Mount Polley Mine in British Columbia, Canada and at Vale’s Brumadinho Mine in Brazil have been orders of magnitude greater than the Talache failures. Unlike the Mount Polley tailings impoundment, Thompson Creek’s tailings are surrounded on three sides by hills. The dam at the mouth of Bruno Canyon, however, is a 600 foot-high dam of sand.

While Thompson Creek is not currently actively mining on site, the mill continues to process ore from other mines. Thompson Creek mine is currently capturing and treating all contaminated water so no hazardous material is being released. However, they will need to continue to maintain the tailings dam and treat and mitigate polluted mine wastewater in perpetuity, regardless of when or if they reinitiate active mining at the site.

In May 2015, ICL filed a formal objection to the Forest Service regarding the most recent expansion of the mine. One of our primary concerns was that the project did not build in an adequate margin of safety into the original design of the tailings dam. We had expressed concern in the past that a dam built only to withstand a M6.5 earthquake when there had already been a M6.9 quake in 1983.

We are thankful that the March 31st quake did not appear to cause a failure, but ultimately, we might have just been lucky. Such a precarious dam in a well-known seismic area needs to be engineered to withstand the maximum earthquake reasonably expected based on the geologic record to provide a bigger margin of safety for the environment.

While we are thankful for the recent reports of stability at the site, we remain concerned and ask that Thompson Creek Mine and the state and federal agencies take a hard look to see if additional stabilization is needed for the tailings dam.

Why did this earthquake happen?

To rock nerds like myself, Idaho is a fascinating place to explore because of how geologically active it is. Earthquakes, while surprising to most of us when they happen, are not as rare as you might think in Idaho. Much of Central Idaho lies within the Intermountain Seismic Belt, a prominent zone of recorded seismicity driven by continuing extension in the shallow crust of the North American tectonic plate. As the U.S. Geological Survey’s seismic hazard map shows, Central Idaho has a higher frequency of damaging earthquake shaking than almost anywhere else in the country, save for the well-known seismic zones in California and Alaska. The majority of magnitude 5 or greater earthquakes in the state tend to occur closer to Challis on known, active faults at the base of the Lost River Range (such as the 1983 Borah quake). The bottom line is this: Central Idaho is a seismically active area, with potential for moderate to large earthquakes (M6.0+), a clear hazard to vulnerable infrastructure like the Thompson Creek tailings dam. 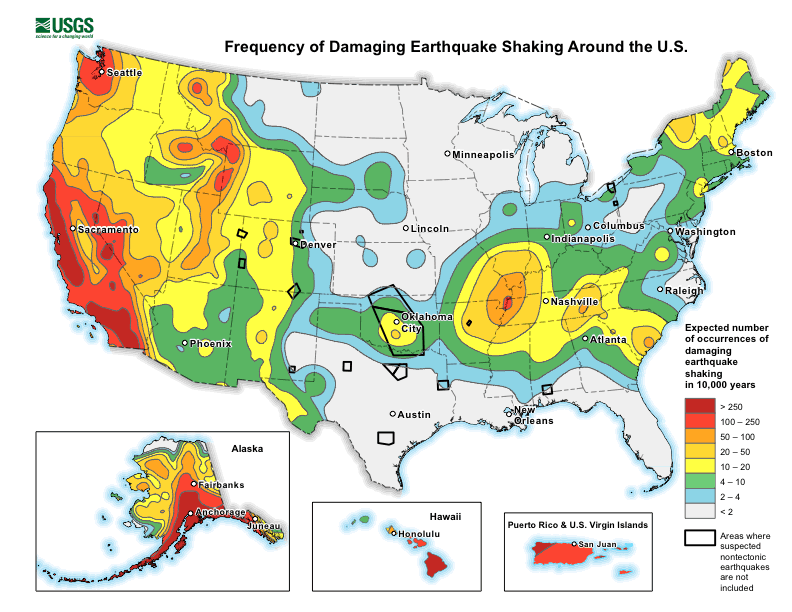