Nestled between the Lost River Range and the White Knob Mountains in the Big Lost River Valley, the town of Mackay is no stranger to mining. From the 1880s to the 1920s, Mackay was the center of a booming mining district. According to the U.S. Geological Survey, the primary mine in the area produced 55 million pounds of copper from 1901 to 1942, along with lesser quantities of silver, gold, and lead. These days, tourism and recreation have mainly replaced mining as the local economic driver, spurred on by superb access to multiple mountain ranges (including Idaho’s highest peaks) as well as excellent fishing in the Big Lost River. 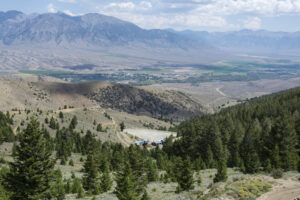 However, with rising global demand for metals, there is currently a proposed open-pit copper heap leach mine in the hills near Mackay. Konnex Resources, a subsidiary of the British mining company Phoenix Copper Limited, is looking to redevelop the old Empire Mine deposit in the Mackay Mine Hill area into a new open-pit mine. The company’s latest analysis projects that the mine (if permitted) would produce around 58,000 tonnes of copper, 13,000 tonnes of zinc, 117,000 ounces of gold, and 4.6 million ounces of silver over a ten-year mine life. And this open-pit project might be just the beginning – the company has other mineral claims in the area that it has intentions to develop if they find sufficient mineral resources..

Residents of Mackay have reached out to ICL expressing concern over what this project might mean for the town, its precious drinking water supply, and the surrounding environment. The town’s primary drinking water source is the Mackay Spring, located relatively close to the proposed mine. The mining company needs to conduct further hydrological surveys to assess whether the spring source could be affected by mining operations. Impacts on air quality and water quality are always a significant concern when it comes to open-pit hardrock mining. According to the Idaho Department of Environmental Quality, previous mining activities at the former Empire Mine site have elevated arsenic levels and associated high cancer risks.

Before this project can proceed, the mining company will need to acquire the necessary permits from state and federal agencies. Most significantly, the project will have to go through a thorough federal environmental review, with the Bureau of Land Management acting as the lead agency. The agency will initiate this environmental review once they receive a complete plan of operations from the mining company (which they have not received yet as of November 2021). Through this process, members of the public will have multiple opportunities to provide input on the project and its potential environmental effects. Stay tuned – we will need you to speak up and make your voice heard!