On July 31, federal agencies released a final version of the Columbia River System Operations Environmental Impact Statement (EIS). ICL is once more disappointed and unsurprised by a fish recovery plan that fails to recover Idaho’s wild salmon and steelhead, even after we and many other groups and individuals across the country provided comments to improve the agencies’ analysis.

The EIS lays out several alternatives for management of the Columbia River System, which includes the Snake River, and analyzes their relative costs and effects on endangered fish populations. The plan recommended by the agencies does not recover Idaho’s endangered salmon and steelhead. The plan’s benefits to wild Snake River Spring/Summer Chinook salmon and steelhead trout are minimal at best, and merely keep these species on the edge of extinction.

A recovery plan that fails to recover

The EIS uses a complex model to evaluate how changes to the system would affect fish populations. The most useful metric is the Smolt to Adult Return Rate (SAR), which measures the number of adult fish that return upstream in relation to the number of smolts, or juveniles, that migrated downstream in a given year. Fish biologists and policymakers across the region agree that SAR must average at least 4% for fish populations to grow and recover. 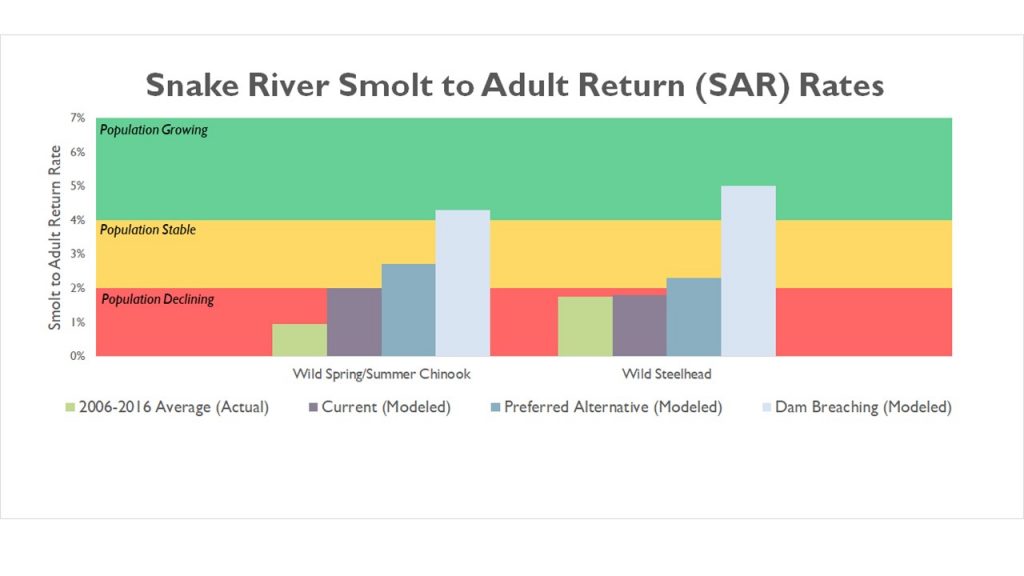 The results show clearly the benefits of dam breaching for endangered fish: breaching was the only option that met the criteria for recovery. The government’s Preferred Alternative falls woefully short with only minor predicted increases to SAR, which aren’t enough to grow fish populations. In light of continuing long-term trends like climate change, this minor tweak is not enough: salmon and steelhead face serious hurdles, which require serious, systemic changes to solve.

The decision from the federal agencies is not surprising: for twenty years, the operators of the Columbia River System have fought to maintain the status quo, even as fish populations have collapsed. This EIS was written only after the previous five federal plans were each ruled “insufficient.” The government seems incapable of finding a new solution to the problem, even when scientists have recommended,  over and over again, that the only way to recover wild salmon and steelhead is to breach the lower Snake River dams.

A Biological Opinion on the EIS, issued by the National Marine Fisheries Service (NMFS), similarly concluded that while dam breaching would provide the most benefits to fish, the recommended plan “wouldn’t jeopardize” their continued existence. This isn’t good enough for ICL, our partner organizations, or the many guides, outfitters, river businesses and communities in Idaho that depend on healthy runs of fish. We want to fully restore our state’s fish to abundant, harvestable populations that all Idahoans can experience and enjoy. The FEIS reveals a path toward that goal but does not recommend taking it. This is a disaster for Idaho and a failure of the agencies. It is time to move on.

It is clear that the federal agencies and their processes are incapable of finding a solution that works for all stakeholders in the Northwest. Over 20 years and multiple attempts, they have failed to produce anything more than lawsuits. We believe now is the time for our policymakers and leaders to come together and form a decision that keeps everyone whole, including Idaho’s fish.

Idaho Governor Brad Little has started this conversation within the state via his Salmon Workgroup, but that discussion must grow to include Oregon, Montana, Washington, and Northwest tribal stakeholders. In bringing these diverse interests together and focusing on the needs of all stakeholders, we can bring back Idaho’s fish, support the communities and businesses that depend on them, and maintain the benefits of the Columbia River system for all people in Idaho and the region.

Help us move away from “us vs. them” and unite around a better future for all. We can restore wild salmon and steelhead to meaningful abundance, build a new, green and affordable energy future for Idaho, and ensure farmers continue to prosper.

After a busy spring and summer of young salmon leaving Idaho and adults coming home, fall is a time for taking stock. Biologists for the Shoshone-Bannock Tribes will survey Pettit …
Article