For the first time in more than thirty years, the U.S. Forest Service is writing a new management plan for the Nez Perce-Clearwater National Forest. That means you have the opportunity to help protect the wild places, rivers, and wildlife that make this place so special.

The Idaho Conservation League is focusing on the Forest Service’s recommendations for new wilderness areas and new wild and scenic rivers in this National Forest. We also want to keep snowmobiles out of the proposed Great Burn Wilderness.

TAKE ACTION  Let the Forest Service know you want to protect this special place and its public lands, rivers, and wildlife. Submit your comments online. The deadline is April 20, 2020.

The Nez Perce-Clearwater is a special place

Snowmelt flows from the crest of the Bitterroot Mountains along the spine of the Idaho-Montana border to form the clean sparkling waters of the Clearwater Basin. These headwater streams are the birth place of salmon and steelhead, who return to their natal streams to spawn as adults.

Bears, elk, fishers, mountain goats, and many other wild animals roam this landscape. Since time immemorial, much of the Clearwater backcountry has been shaped primarily by the forces of nature, and we hope to keep it that way.

Click the following for basic information on Forest Planning and a video guide. Keep reading below to learn more about why ICL is recommending wilderness areas and wild and scenic rivers designations for the Nez Perce-Clearwater.

Wilderness areas are available for hiking, hunting, fishing, camping and solitude. Because they are off limits to logging, mining and motorized vehicles, wilderness areas are also important to protect fish and wildlife habitat from development. ICL is encouraging the Forest Service to recommend the following areas for wilderness in the new plan: 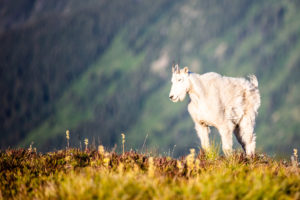 There are no wilderness areas in Idaho north of the Lochsa River, but the Great Burn has long been considered one of the top candidates for protection. Unfortunately, the Forest Service is considering a proposal to carve out two chunks of land near Black Lead Mountain and Hoodoo Pass for snowmobiles. Opening these areas to snowmobiles would force mountain goats away and cause their decline. The Great Burn is also a critical migration corridor for grizzly bears, wolverines, and lynx. Increased motorized recreation along the Idaho-Montana Border would affect the movement of wildlife. The Forest Service should not open any portion of the area to snowmobiles. We support a recommendation to protect the entire area as wilderness and to prevent the decline of mountain goats and other wildlife living in the area.

The proposed Mallard-Larkins Wilderness provides outstanding opportunities for hiking, backpacking, hunting and fishing in a non-motorized, backcountry setting. The area provides habitat for elk, mountain goats, cutthroat trout and many other animals. We support a recommendation to protect this special place as wilderness for the benefit of wildlife and people seeking a primitive recreational setting. 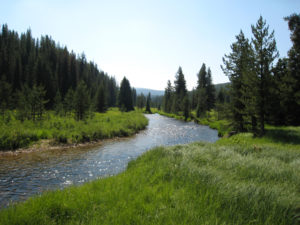 East and West Meadow Creek encompass a 200,000-acre watershed that flows into the Selway River near the western edge of the Selway-Bitterroot Wilderness. According to fish biologists, there is no greater diversity of wild salmon, steelhead, trout and char anywhere in the Rocky Mountains. The Forest Service should recommend East and West Meadow Creek for wilderness to protect this important fish habitat.

The North Fork is a popular cutthroat trout fishery. There is also a population of threatened bull trout that migrates up the river to spawn in late summer. Unfortunately, federal agencies have identified twenty-six potential dam sites on the river above Dworshak Reservoir. The free-flowing portion of the North Fork Clearwater River should be identified as a suitable wild and scenic river to protect the remaining cutthroat trout and bull trout from potential new dams and water diversions.

The South Fork provides critical habitat for B-Run steelhead. Unlike A-Run steelhead that spend just one year in the ocean before returning home to spawn, the B-Run steelhead spend two years in the Pacific, growing even larger than their cousins. There are eleven potential dam sites on the South Fork. Construction of dams or diversions would impact B-run steelhead as well as the river’s scenic character. The South Fork Clearwater River should be identified as a suitable wild and scenic river to protect one of the few B-Run steelhead fisheries in Idaho.