Honoring the legacy of Cecil D. Andrus in the White Clouds

The White Clouds Mountains are a crown jewel of central Idaho and a special place for many Idahoans. The protection of this incredible landscape as designated wilderness in 2015 did not come easy, however, and is a testament to the persistent efforts of a long line of Idaho conservation heroes, beginning with Cecil D. Andrus (the late former Idaho Governor and U.S. Secretary of the Interior).

To honor Andrus for his seminal efforts to protect the White Clouds from mining in the early 1970s, Idaho Rep. Mike Simpson championed a bill that passed Congress in 2018 to officially rename this area the Cecil D. Andrus-White Clouds Wilderness.

With the name change official in law, it was time to make it official on the ground. The U.S. Forest Service (USFS), given its tight budget and backlogged work schedule, did not initially have the funds or labor to make and install new wilderness signs. Thankfully, Craig Gehrke of The Wilderness Society and Andy Brunelle, a Gov. Andrus staffer from 1988 to 1995, stepped in to raise $8,000 in funding to purchase signs bearing the new name.

ICL staff and volunteers, in conjunction with USFS employees, have installed a total of 13 of these new signs along the wilderness boundary in the last two years. In some locations, such as the Slate Creek and Garland Creek areas of the White Clouds, we replaced existing wilderness signs with signs bearing the new name, a relatively simple task. In other locations, however, there was no wooden wilderness signage installed, so we had to additionally bring a large wooden post for it to be affixed to (usually completed with pack support). Some signs were a mere half-mile from the road; others involved nearly 20 miles of hiking roundtrip to reach! 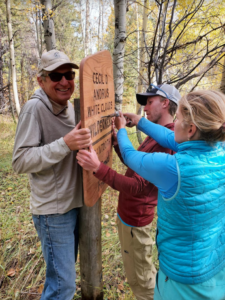 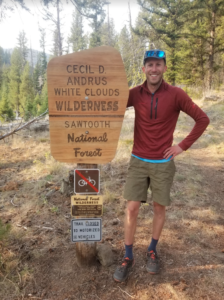 If you make a trek into the White Clouds next summer, whether over Antz Basin Divide, to Chamberlain Lakes, or anywhere in between, keep an eye out for one of the new wilderness signs. When you see one, take a moment to reflect on the people who help protect this special place. 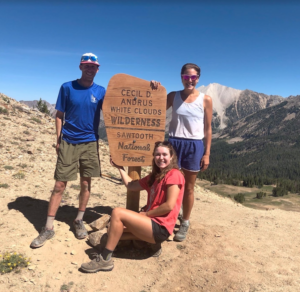 Andrus’ work lives on through the Andrus Center for Public Policy at Boise State University.

ICL has a rich history of wilderness advocacy to help protect the special wild places Idahoans love. Our members were instrumental in establishing the Frank Church-River of No Return, Owyhee Canyonlands, and Boulder-White Clouds wilderness areas. Currently, our Central Idaho office runs a very successful wilderness stewardship program. We look forward to continuing to protect and steward Idaho’s exceptional wilderness areas for decades to come.