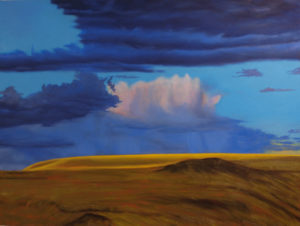 The passion that artist Carl Rowe has for Idaho and for what he calls its "sumptuous allure and sinewy, mysterious beauty" radiates from his large canvases. A painter for more than 25 years, Carl is represented by galleries across the West – and was selected as this year’s Idaho Conservation League artist in residence!
Carl’s contemporary landscape paintings portray the rugged muscularity and vast spaces of Idaho’s beautiful lands, using the natural light that plays over their forms to emphasize their scale. Carl began painting in order to interact with the Idaho land that mesmerized and inspired him. View a brief slideshow of Carl’s work. 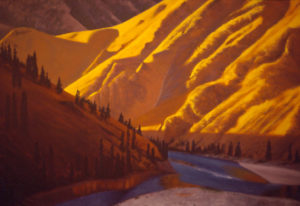 Upon moving to Boise, the foothills above the city became the subject of his study. There, he says, "Though the land seemed huge in scale and seemingly imperturbable, I soon realized that many forces besides Nature’s sculpting influences were at work. I quickly saw that development of some sort threatened nearly every area."

His ties to conservation and the Idaho Conservation League go back at least as far as the successful Boise foothills open space levy of 2002, when one of his paintings was featured on the campaign poster.

While Idaho’s mountainous landscapes fascinate him, Carl’s rural childhood influences his thoughts about conservation in Idaho to this day. For his residency project, Carl will explore areas across the state of Idaho to paint the natural beauty found near Idaho’s smaller towns.

ICL’s 2019 artist in residence says, "I live here because of the land, and the land retains its character in large part because the ICL has ensured large swaths of it stay in their natural state. Partnering with the ICL [perfectly reflects] my relationship with my home and the artistic journey that land created for me."

Carl’s accomplishments and awards are numerous and include Honorable Mention Fellowship in Fine Arts from the Idaho Commission on the Arts as well as the Culture and Conservation Award from Land Trust of the Treasure Valley for the beauty of his Idaho landscapes. He was unanimously selected as the recipient of the City of Boise’s Mayor’s Award for Excellence in the Arts in 2015, based on his passion for the performing arts, from early years in band and choir to later years as a professional dancer and choreographer, and his more recent work as a painter of Idaho landscapes.

You can see Carl Rowe’s art on his website. He is represented by the Kneeland Gallery in Ketchum; the Art Spirit Gallery in Coeur d’Alene; the Attic Gallery in Camas, WA; and the Schomburg Gallery in Santa Monica, CA. His paintings are held in private collections throughout the United States.

The Idaho Conservation League artist in residence program explores the nexus of art and nature. It exists to share the beauty of the places ICL works to protect and tell the Idaho story in creative new ways to expanded audiences. The program is sponsored by ARTA River Trips.

Learn more about Carl Rowe and the ICL artist in residence program.