ICL’s Wilderness Steward Program Off to a Fast Start

Editor’s note: This article was authored by Brian Rich. Brian is the ICL’s Central Idaho Intern for the summer and has been working closely with ICL’s wilderness steward program over the past few weeks.

Launched just one month ago, the ICL’s Wilderness Steward program is off to a fast start. So far, volunteer stewards have visited all four of central Idaho’s wildernesses to collect data for the U.S. Forest Service. Stewards set off on self-defined treks and report back to both the ICL and the Forest Service on wildlife sightings, trail conditions and the prevalence of users. 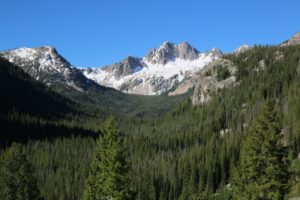 Spearheaded by Betsy Mizell of the ICL’s Central Idaho office and Katy Nelson of the USFS, the ICL’s Wilderness Steward program is the first of its kind in Idaho and is designed to address the staffing limitations of the Forest Service. The volunteers effectively act as extra eyes and ears in Idaho’s  new wilderness areas-Hemingway-Boulders, White Clouds, and Jim McClure-Jerry Peak wildernesses. Already, the initiative has attracted the attention of the Idaho Mountain Express, which recently published a brief article about the inspiration and goals of  the program.

With over 493,000 acres of federally protected wilderness in Central Idaho alone, the volunteer stewards play a valuable role for  the Forest Service. The data that the stewards collect ensures that the Forest Service can direct its limited personnel and resources to areas that need them most. However, much of this data is also relayed to the public through visitor centers and ranger posts. Recently, a steward was able to inform the Redfish Lake visitor center on the border of the Sawtooth Wilderness of the trail conditions leading up to Sawtooth and Alpine Lake-a question whose answer  would have normally required dispatching a ranger. This open communication between wilderness users and those that manage it will help the wildernesses retain the very characteristics that earned them the gold standard for preservation. 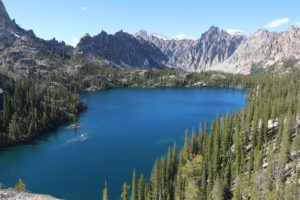 While the ICL and the Forest Service may be the facilitators and directors of the Wilderness Steward program, at the core of it all are the volunteers themselves. Their firm conviction and belief in wilderness are ultimately what makes this program possible. With that said, there are only 30  of them and nearly half a million acres of wilderness in central Idaho. Despite this daunting task, I am certain that this year is only the beginning of a much larger program.

After the article was published in the Idaho Mountain Express, we received several phone calls from individuals interested in becoming stewards. Unfortunately, we told them they would have to wait until next year’s training session. Many enthusiastically said they would call again in the spring.

It is heartening to know that there are so many stewards waiting to join and perpetuate the mission of this program. While  there are over 4.8 million acres of wilderness in Idaho, there are also thousands of Idahoans who deeply care about this state. When the wild calls, Idaho can depend on them to answer.

If you would like to receive more information, or are interested in becoming a steward for next year, please send an email with your name and phone number to stewardthewilderness@gmail.com.