This week (March 6-12, 2022) is National Groundwater Awareness Week, an annual observance to highlight the responsible development, management, and use of groundwater. ICL will be doing a series of blog posts this week to highlight Idaho’s precious groundwater resources.

What is an aquifer?

An aquifer is a body of saturated rock through which water easily moves through due to its permeable and porous nature. The water stored in these formations is called groundwater. Aquifers not only provide both groundwater storage but also filtration, acting as filters that trap sediment and other particles (like bacteria) and provide natural purification of the groundwater flowing through them. When not affected by contamination, aquifers can offer a plentiful source of clean, cold water for drinking water and irrigation water.

The Eastern Snake Plain Aquifer (ESPA) is the largest aquifer in Idaho and a genuinely priceless resource. The ESPA covers approximately 10,800 square miles in southern Idaho and supplies drinking water to nearly 300,000 people in south-central and eastern Idaho, including the quickly growing I-84/86 corridor from Twin Falls to Rexburg. 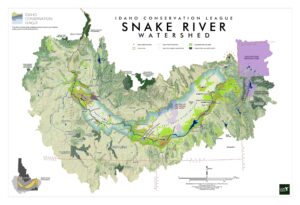 The ESPA’s importance as a water supply for Idahoans derives directly from its fiery geologic origins. Beneath the Snake River Plain lies a very thick (~5,000 feet) stack of basalt rock formed by volcanic activity as the North American continental plate passed over the stationary Yellowstone hotspot in the last 12 million years. This highly fractured volcanic rock allows surface water to easily enter the aquifer through interconnected pore spaces in rubbly lava flows. The upper 300 to 500 feet of the aquifer stores most of the groundwater, and the total storage capacity roughly equals that of Lake Erie (200 to 300 million acre-feet). Snowpack runoff from the numerous mountain ranges of central and eastern Idaho naturally recharges the aquifer. This is supplemented by infiltration of excess irrigation water and managed aquifer recharge, where surface water is intentionally allowed to infiltrate into the aquifer.

Unfortunately, groundwater quality in the ESPA beneath the Magic Valley has been degraded, primarily due to contamination from the overapplication of fertilizers and animal waste across the Snake River Plain. The nitrogen and phosphorus from synthetic fertilizer, animal manure, and other sources far exceed what typical crops can uptake, with the remainder susceptible to leaching into the groundwater. ICL issued a comprehensive report last fall on the groundwater contamination issues in the Magic Valley and continues to work to ensure residents of southern Idaho have access to clean drinking water from the Eastern Snake Plain Aquifer.

The Snake River is far too important to allow it to continue to be degraded in a manner that will have lasting effects on our economy, community health, fisheries and wildlife. Take action and let your state legislators know that you want to see a cleaner Snake River!

Next up for Groundwater Awareness Week – learn how the Eastern Snake Plain Aquifer has transformed an arid, high desert into the “Magic Valley” that we know today.