Editor’s note:  This article was authored by Brian Rich. Brian is the Central Idaho intern for ICL for the summer of 2016. He is currently a student at Middlebury College in Vermont.

On June 12, the ICL kicked off its new wilderness  steward program at the Sawtooth National Recreation Area visitor center in Ketchum. Throughout the day, the new stewards met with U.S. Forest Service rangers to prepare for their upcoming wilderness treks, during which they will be assisting the Forest Service in documentation and preservation tasks. The wilderness steward program, based upon similar programs in other federally-designated wildernesses, is designed to address the staffing limitations of the Forest Service by recruiting volunteers to aid in data collection as well as public outreach. The volunteer stewards will be asked to complete at least four treks, during which they will venture into the Sawtooth, Jim McClure-Jerry Peak, Hemingway-Boulder, and White Clouds wildernesses to record visitor numbers, trail conditions, and locations that merit attention from the Forest Service. The program is made possible by a grant from the Wilderness Stewardship Alliance.

Nearly thirty volunteer stewards attended the training session, during which they honed their skills not only in the classroom, but in the field as well. The classroom session introduced the rules and regulations that surround the new wilderness areas, but also asked the stewards to take on challenging topics such as non-confrontational conflict resolution. 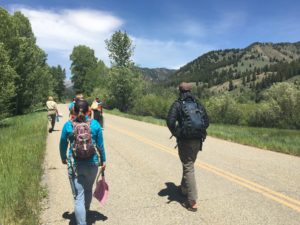 After a hearty lunch, the stewards hit the trail to rotate through several training stations set up by the rangers to simulate situations commonly encountered in the backcountry. From deconstructing fire rings (prohibited in the Sawtooth Wilderness) to effectively identifying the potential risks associated with a trek, the rangers shared their knowledge on the basics of wilderness stewardship.

Although the stewards (and the intern) returned to the visitor center sunburned and exhausted, enthusiasm remained high as the day drew to a close. I for one am thrilled to be working with this program, as it will certainly be the focus of most of my summer here with the ICL. The stewards will be serving a valuable role not only to the Forest Service, but also to all those who value the wilderness and the meaning that it holds.