It’s All About Leverage

Tensions were laid bare this week as the Legislature tried to wrap up its work and head for the doors. In theory there are only ten days left in the session. In reality we could be here for several more weeks, especially if they can’t come to a decision regarding Medicaid expansion, work requirements and other must-pass spending bills. This time of year it’s all about priorities and leverage. If the Senate wants to pass a Public Schools Funding Formula Bill and the House wants a Medicaid Work Requirement, they’ll leverage their own priorities against the other chamber’s priorities in an attempt to each get their own way. An unfortunate reality of politics and bad news is that this could result in bad policy for our air, water and democracy, among others. 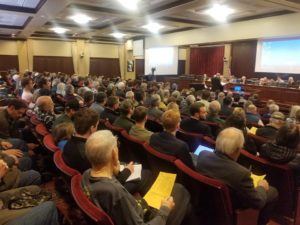 On Monday, 400 public land supporters packed the Lincoln Auditorium (and an overflow room) for a hearing on HB 162, which would establish a Federal Lands Council. The troubling bill drew a crowd because it’s a page out of the playbook of the public lands takeover effort and would further the effort to seize and control our public lands. Despite the fact that 150 people turned up to testify, the committee only heard from 7 of them. Based on concerns from members, the committee unanimously voted to send the bill to the 14th Order for possible amendment. Sometimes bills go there to die, other times to be amended. We’re hoping it’s the former, not the latter. There’s still time to contact your Senator so speak up against the Federal Lands Council TODAY!

Public Lands Part 2 — One More Chance to Show Up! 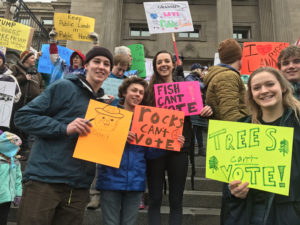 You’re losing your voice, your feet are tired and you feel like your concerns are falling on deaf ears? Trust Us! We know … we’re tired of going to the Capitol everyday, too (!!). But it looks like Monday they may have HB 162 on the Senate agenda at 10 a.m. AND HJM 5 will be up for a hearing in the Senate Resources Committee (Garden Level, Room WW55) at 1 p.m.  If you can’t make it, you still have time to contact your Senator. Here’s background info and take action links for both HB 162 and HJM 5. 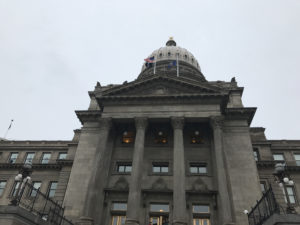 There was lots more happening at the Statehouse this week, including a bill that would limit citizen initiatives in Idaho that drew over 5 hours of testimony on both Monday and Friday. Although I was the last one to testify this morning in opposition to the bill, I remained steadfast because engagement of citizens to protect our environment has been part of our mission for over 45 years. There are important laws on the books today because of citizen leadership, including: Lobbyist and Political Transparency (Sunshine Laws enacted in 1978 with 78 percent support), Dredge Mining regulation (enacted 1954 with 85 percent of the vote!) and the establishment of the Idaho Fish and Game Commission (enacted 1938 with 76 percent of the vote). The bill was held for further action at the discretion of Chairwoman Patti Anne Lodge (R-Huston), and it sounds like it’ll be up for a vote next week.

In Other (Good) News 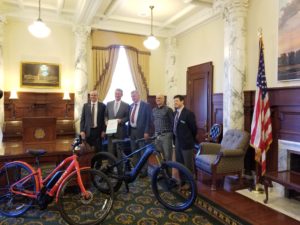 A bill that’s moving would provide consumer protections for homeowners who install solar energy systems. We worked with both Idaho Power and solar installers to come to consensus and it’s already advanced to the House. Another solar bill is on its way to the Governor’s desk. Sponsored by Reps. Randy Armstrong (R-Inkom) and Ilana Rubel (D-Boise), it would limit the ability of homeowners associations to block solar panels. A formerly-troubling bill from Rep. Heather Scott (R-Blanchard) would have limited the ability of conservation officers to conduct searches. Instead the bill was gutted (in a good way) and now conservation officers will have the same rights to search as other law enforcement agencies. A measure that would have gutted County Comprehensive Plans died on the House Floor. ICL was pleased to attend the Governor’s bill signing ceremony for the E-bike legislation. And totally unrelated to the Statehouse, we received great news regarding the South Fork Payette River! 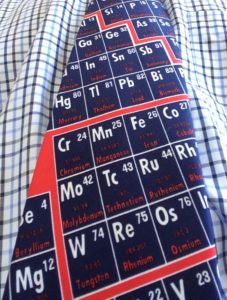 Thursday, March 14 was π (Pi) Day. It was also Albert Einstein’s birthday and Idaho students are competing in the Idaho Science Bowl. Since science informs much of the work that ICL does, and since science is still part of our schools’ curriculums, this week’s tie is dedicated to all the scientists in our lives. Whether they design our computer chips, read our lab reports, study our wildlife or monitor the snowpack, this tie’s for you!