Lekking out with sage grouse: A first outing with ICL

The Owyhee Canyonlands are one of southern Idaho’s natural treasures. A special place where Wilderness and Wild Rivers meet in wide-open desert vistas that suddenly collapse into a labyrinth of canyons, creeks, and towering, craggy peaks.

Part of the sagebrush sea that used to cover much of the American West and southwestern Canada, the Owyhees are also home to one of our most unique and feathered friends, the Greater sage-grouse –  a BLM-sensitive species. A bird indigenous to rapidly disappearing sagebrush habitat, the sage-grouses’ unique mating ritual begins pre-dawn and continues only for a few hours. In my first outing with ICL, we drove into the Owyhees to witness this spring event.

Catching this early morning courtship display takes some planning, especially if you like to sleep in during the weekends. We had two options: drive to the Owyhees the night before and camp out, or leave Boise at the ripe hour of 4:30 am to get to the lek (the area where this ritual will take place) 2 hours later. It’s my personal opinion that waking up at 4 am should be illegal, and on a Saturday might be considered cruel and unusual, so we chose the first option.

On Friday evening, we left Boise and pulled into the campsite off Mud Flat Road, and after setting up tents, settled in around the fire. For over 2 hours, under a crescent moon and unclouded stars, we talked about sage-grouse, osprey, owls, other birds I had never heard of, threats against bird habitat – geeking out on the most diverse vertebrate species on Earth.

Eventually, we had to call it a night. Layering against the freezing cold, we sealed ourselves in sleeping bags. We fell asleep to the sound of cold, desert winds coming over the dusty roads, lightly shaking our tents, and the soft coos of a not-far-off long-eared owl.

The next morning, as a thin strip of muted, pre-dawn light appeared over the mountains, it was time to head out. The sage-grouse were presumably out there already at the lek, strutting their stuff and warming up for the main event. We were reminded that once we get near the lek, it’s extremely important to be mindful of the noises you make. An accidental slam of the car door could startle the sage-grouse and flush them from the area, essentially wasting our early morning wake-up call.

Driving further into the mountains, we parked several hundred yards from the lek. After gingerly closing our car doors, we made our way down the dirt path. We walked in anticipation towards the sunrise, and I had the feeling that we were leaving familiar territory and entering the domain of this other creature to witness something very private and very ancient. 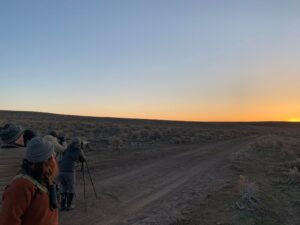 From about 200 hundred yards away, we stopped along the path and listened. Even from that distance, we could hear the strange sounds of the sage-grouses’ unusual courtship. It’s difficult to describe, but I’d say it sounds like synthesized, heavy water droplets, scattered and varied in tone and volume. It’s a kind of “bawoop bawoop” – a plopping, bobbing sound. Someone else described it as sounding like a turkey gobbling into a balloon. These sounds were mixed with a subtle zipping sound the males make by rubbing stiff feathers together.

Through binoculars and spotting scopes, we saw them – male sage-grouse strutting quickly and ceremoniously back and forth in the lek, their tail feathers spread out in a stiff fan. At times, the rising sun would hit those tail feathers just right and create a fiery halo around the bird. 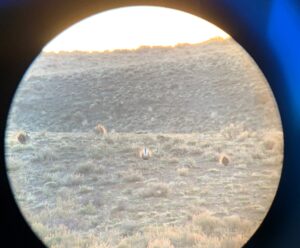 In between this seemingly random and simultaneously very calculated strutting, a male pauses, and from beneath his white chest plumage, previously invisible, yellow air sacs inflate until they effectively double his size. The unusual sounds we heard came from the males inflating these gallon-size air sacs on their chests and deflating them in a jolting “bawoop bawoop.” Over and over, we watched these males strut, stop, and balloon up in the hopes of gaining the approval of a hen – males literally puffing out their chests in hopes of impressing females.

The hens are more unassuming and more difficult to spot from afar, their coloring allowing them to disappear into the landscape. But I was told by the more experienced members of our group that in comparison to the 30+ males in attendance, there were maybe 2 to 3 females. Our visit was late in the season, so it’s possible that many of the females in the area had already mated and were hopefully on their nests.

I had never seen anything like it. One person in our group said that it’s best to watch the display and imagine David Attenborough’s commentary. That’s truly what it feels like to witness this behavior – like seeing our own North American birds of paradise.

We stood unnoticed by the birds for almost two hours, not wanting to miss anything, seeing how they would finish this ritual. I almost expected a bow.

It was a fairly anticlimactic ending, though. Over the course of the last 30 or so minutes, the crowd of males thinned as they flew off one by one – I’m guessing to rest their lungs and legs. They would have to be ready to do it all again the next morning.

Seeing these unique birds act out this ritual is an experience few people will get to witness. And, if we don’t act now to preserve the habitat and lands they live on and use for their mating practices – and the rest of their life cycle – it’s not an experience that anyone will get to have.

Sage-grouse are in danger. They occupy only half their original range and have dwindled to less than 5% of their original population. Invasive grasses and wildfires, encroaching development, agriculture, and poor land management have destroyed sage-grouse habitat and sagebrush, a key food source.

Sage-grouse are a BLM-sensitive species, and not protected under the Endangered Species Act. Based on a collaborative initiative between states and the federal government, the Bureau of Land Management updated its Resource Management Plans with somewhat improved protections for sage-grouse. These updated plans were deemed sufficient by the U.S. Fish and Wildlife Service to conclude that sage-grouse did not need additional protections.

Since the plans have been put in place, sage-grouse numbers have continued to nose dive, and a recent study found that numbers have dropped 80% rangewide since 1965.

The Owyhees in southwest Idaho still have some of the best remaining populations. We are encouraging the State of Idaho, BLM, and USFWS to take a closer look at sage-grouse management. The status quo isn’t working.

I left the Owyhees that morning with a greater appreciation for the work conservation groups like ICL do to protect our public lands so that amazing creatures like sage-grouse can continue calling Idaho and the West home. If you are interested in learning more about the ways that ICL works to protect public lands, wild rivers, wildlife habitat, and clean air and water, consider subscribing to our email and becoming a member.

Plus, thanks to the generosity of The Tzo’-Nah Fund, all gifts made to ICL during Idaho Gives (April 29 – May 6) will be matched up to $30,000. Double your impact for Idaho’s environment by making a gift during Idaho Gives!