The U.S. Army Corps of Engineers has proposed building a new trail in a primary migration corridor for thousands of mule deer and elk. The 15-mile long trail, located on land south of Lucky Peak Reservoir, would skirt the water where deer and elk travel down from higher up on the slopes to drink and eat vegetation. The Idaho Conservation League does not support the trail as currently planned as it would severely impact wildlife and their habitat. 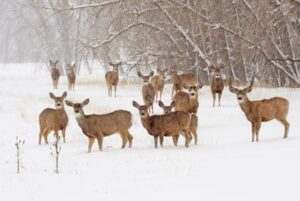 The Corps manages the dam and the land immediately surrounding Lucky Peak Reservoir. The federal agency’s trail would lie on the northern boundary of what’s called the Charcoal Creek Segment of the Boise River Wildlife Management Area (BRWMA).

This segment is the most intact and unfragmented part of the BRWMA, and supports the largest number of area mule deer during the winter months. Even though the Corps proposes closing the trail during the winter season, similar closures haven’t worked and have tallied thousands of violations.

Because this plan would disrupt wildlife and their habitat, ICL recommends the Corps do not build a trail and keep the Charcoal Creek Segment in its current state. ICL also suggests the Corps form a coalition of interested stakeholders to find a solution that meets the needs of a growing population while protecting this unique landscape that attracts so many people and wildlife.

Let the Corps know they should adopt a “No Action Alternative” because you support responsible recreation that does not threaten critical winter habitat for mule deer and elk. Instead, the Corps and its project partners should look at different locations for a trail that finds the right balance between conservation, recreation, and wildlife and habitat protection.

We ask that you join this conversation by submitting your comments online or by email to NEPANWW@usace.army.mil, inserting “LP Trail EA” in the subject line. The deadline for comments is August 20.

Three segments of the BRWMA surround Lucky Peak Reservoir and provide critical winter habitat for the state’s largest mule deer herd. Up to 8,000 mule deer and nearly 2,000 elk migrate from as far away as the Sawtooth Mountains to spend the winter in the low-elevation foothills, browsing on the sagebrush and bunch grasses found in the BRWMA.

Idaho Fish and Game oversees the 36,000-acre management area, using guidance provided in a Wildlife Management Area Plan, which calls for no additional motorized or non-motorized trails in the BRWMA.