Salmon Club: A united movement to bring our fish home

In November of 1991, thanks to the dedicated work of the Shoshone-Bannock Tribes, Snake River sockeye salmon were listed as an endangered species. The following year, a single sockeye returned to the iconic Redfish Lake – a lake named for its once plentiful scarlet fish that turned the water red during spawning season. Since its listing, sockeye populations have still not increased, and the fight to recover this keystone species continues.

The decline of salmon populations was not limited to the Snake River sockeye, but all species of salmon and steelhead that call Idaho home. Decades of overfishing, poisoned water, waterway modifications and other disruptions have caused salmon populations to continue on this dangerous downward trajectory to today’s concerning numbers. 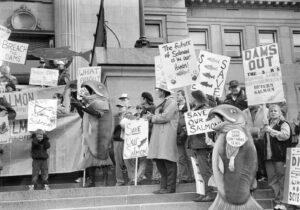 As dams were built throughout the Columbia Basin, Tribal members stood up for this primary food source that plays a pivotal role in their cultural identity. They expressed deep concerns about the detrimental impacts dams would cause. Now, we look back and see they were right – museums throughout the basin show photos of the last big salmon runs and ceremonies, such as the “Ceremony of Tears” at Grand Coulee Dam on the Columbia River in 1940. In each case, Tribal members honored these fish that have physically and spiritually nourished their people for thousands of years.

When dam construction began, the Federal government promised that the Tribes would still be able to harvest fish. Those promises have proved to be as empty as the nets cast into the water, as wild salmon have disappeared  right before our eyes — along with the cultures that depend on them.

These effects were not only felt by the Tribes closest to the dams along the Columbia and Snake rivers, but throughout the entire watershed. Wild salmon have also disappeared near Lower Salmon Falls Dam in Idaho’s Magic Valley. In its place now stand informational signs discussing the historical importance of salmon for indigenous Tribes and pioneers that came to the region. Although the entire region acknowledges that salmon have a place in these waters and are icons of the region, salmon numbers continue to decline toward extinction. 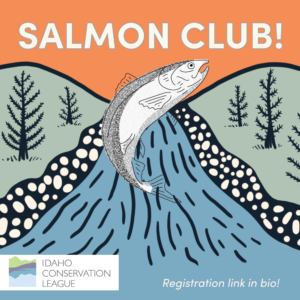 Salmon advocates have joined Tribes in the fight for saving these fish from extinction and bringing them back to abundance, but until decision-makers in Congress join the fight – the future of salmon is concerning. Restoring wild salmon populations is vital for protecting the species, preserving intact ecosystems, ensuring river communities have an economy, and upholding food sovereignty and treaty rights for Northwest Tribes.

There is only one way to bring these fish home: build a movement that is informed, loud, and united. To help bring Idaho’s salmon activists together, the Idaho Conservation League has launched a Salmon Club in both Boise and the Wood River Valley. Salmon Club workshops for all ages are hosted bi-monthly in each location, where we will use various forms of advocacy to raise awareness and restore salmon populations! ICL invites you, your family, friends, and colleagues to join us in this historic,  united movement to invoke change, promote intact ecosystems, support Tribal food sovereignty, and bring our fish home!