Last week, ICL staff got a rare opportunity to join Shoshone-Bannock Tribal fish biologists for their annual redd counts in Idaho’s Pettit Lake. The lake, which lies near the headwaters of the Salmon River in Central Idaho, is home to Snake River sockeye salmon. These fish travel more than 900 miles and 6,996 feet uphill from the Pacific Ocean.

On a crisp, sunny afternoon, we arrived to find the surface of the water like glass, perfectly mirroring the towering Sawtooth Mountains that embrace the lake on three sides. Once everyone arrived, we boarded a worn Wooldridge boat fitted with a single seat and a depth finder and set off along the lakeside. This annual survey aims to count how many nests, or “redds,” this year’s sockeye dug. The fish dig their redds in shallow water near the lake’s inlets, using their whole body to excavate a shallow depression in the fine sediment and gravel. The fish will lay their eggs in the redd, fertilize them, and then die. Their carcasses decompose, filling the lake ecosystem with essential nutrients. 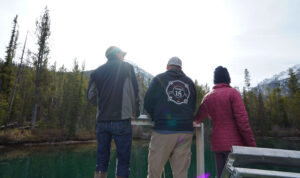 As we approached the lake’s western end, lead technician Rob Trahant and project lead Rebecca Croy started to call out numbers, tallying the redds they saw as the boat passed. The Tribes’ sockeye program director, Kurt Tardy, noticed my frustrated expression: I wasn’t seeing what they were seeing. “Look ahead,” he said, “find the bright spots ahead of the boat and follow them with your eyes.” With this advice, I started to see redds as lightly-colored spots in the dark floor of the lake. The lake floor became a moonscape of craters: dozens of redds clustered tightly together. 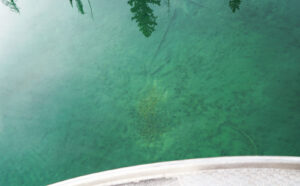 Historically, more than 25,000 fish returned annually to Pettit and other lakes in the Sawtooth Basin, making the waters appear red in their multitudes and giving nearby Redfish lake its name. Early settlers and industrialists opened commercial fisheries, decimating fish populations in the late 1800s. In 1910, a mining company constructed Sunbeam Dam on the Salmon River, just downstream of the basin. Until the dam’s breaching in 1934, the dam completely blocked the salmon migration.  Even though the fish could no longer complete their ocean migration, they persisted. Sockeye salmon are naturally anadromous, meaning they travel to and from the ocean during their lifecycle. However, they can take a non-anadromous, “residual” form and remain in the lake for their entire lives. These residuals’ redds are smaller than those of the anadromous sockeye, making them easily distinguishable. After the breaching of Sunbeam Dam, some fish regained their anadromy, restarting their journey to the ocean and becoming the ancestors of the fish here now. 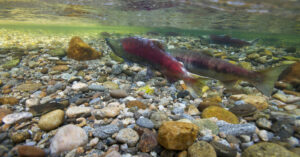 In 2021, no sockeye salmon successfully swam the 900-mile journey back to Pettit Lake. This year, three natural-origin fish hatched in the lake were trapped at Lower Granite Dam near the Washington-Idaho border and trucked to a hatchery near Boise. This long journey by truck was necessary because of dangerously high water temperatures on the Snake River, where dams impound the water to create stagnant, polluted reservoirs. In these hot waters, sockeye stop their migration, become susceptible to parasites, and perish. 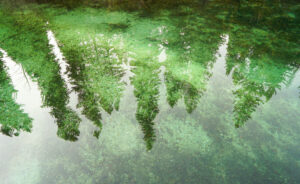 In four of the last five years, fewer than 20 wild fish have returned to Central Idaho. Idaho’s sockeye have had previous close calls with extinction. Sunbeam Dam stopped the run entirely for more than two decades. Construction of the Columbia-Snake River system of dams further downstream reduced their numbers again, coming to a head in the early 1990s, with the listing of sockeye salmon under the Endangered Species Act (ESA). After the population had somewhat grown, a heat wave in 2015 killed 99% of returning Snake River sockeye, cooking them in the lower Snake River reservoirs.

November 20, 2021, is the 30th anniversary of the Snake River sockeye’s initial ESA listing. During the summer of 1991, four fish made it home to Idaho, confirming the Shoshone-Bannock Tribes’ petition to have the species protected and convincing the federal government to agree to the listing. Federal, state, and Tribal agencies have spent 30 years and hundreds of millions of dollars to help Snake River sockeye. While much has been accomplished to stave off extinction, 2021 brought the same number of wild sockeye to Redfish Lake: four.

The crew loaded the boat back onto its trailer, pulling it from the water. This is the last time they’ll see the Pettit Lake population until winter when they’ll cut through the ice to perform wintertime surveys on the juvenile fish emerging from the redds. It’s monumental work to ensure the survival of a species. Still, the biologists are sure that everything they do won’t be enough to bring sockeye back to true abundance or even get them off the endangered species list. Idaho’s alpine lakes are excellent salmon habitat, but very few fish can travel safely through the gauntlet of dams, reservoirs, and predators in the lower river. “The biggest out of basin challenge is the operation of the lower dams: four on the Snake, four on the Columbia,” says Kurt. “Without a doubt, that is one of the largest impediments to salmon recovery.”

To observe the 30th anniversary of the Snake River sockeye listing, ICL is hosting a vigil event on November 20, 2021, at the Idaho State Capitol in Boise. This year’s anniversary will be in conjunction with other events happening across the Northwest. Join us then, and take action today. Tell your state and federal elected officials to act now to save Snake River salmon and steelhead.

We often say that, without the work of Tribes, Idaho’s wild salmon and steelhead would be gone. It’s easy to dismiss this as hyperbole, but in this case, it’s not …
Article

Stories of the Snake: Headed downriver