At midday May 19, some 30 Idahoans watched as the highest-born sockeye salmon on earth flowed out of Pettit Lake. Three to seven inches long and silvery, they were on their way 920 miles through the Salmon, Snake, and Columbia Rivers to ride the liquid plume into the Pacific.

From both walkways of the new weir over Pettit Lake Creek, built and operated by the Shoshone-Bannock Tribes, we saw these young sockeye during a brief delay. As they circled in a shaft of water they had just entered but could not exit, two tribal technicians began netting them. 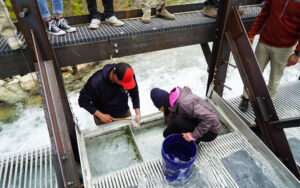 Some were also injected with a PIT tag, readable at various points downstream. A few minutes later, sedative dissipated, they were back in Pettit Lake Creek, elevation just under 7000 feet, and off again.

In 1990, the Tribes filed the first Endangered Species Act petition ever for a salmon, for Snake River sockeye. 31 years later, the Tribes lead the sizable sockeye recovery programs in Pettit and Alturas Lakes.

I find myself remembering those little sockeye at the weir and, by reflex, I try to follow them out. Those that have survived the first week in rivers are now in or entering 320 miles of unyielding concrete operated by obdurate federal institutions.

But on May 19, the mood at Pettit was positive. Shoshone-Bannock leaders and staff conveyed a deep intention to restore sockeye salmon to Pettit Lake. The path of work has been thought through culturally and scientifically. They were happy, each in her or his way, to show and talk to us through what they do for Idaho’s fish. 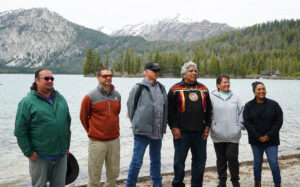 While describing the work on-site, they also said what is needed off-site – that Congressman Mike Simpson’s legislative concept needs to pass Congress. Everyone learned and, I think, everyone left in some measure inspired.

At Redfish Lake, in addition to natural spawning, the Idaho Department of Fish and Game also releases one million hatchery-born and reared sockeye smolts each year into Redfish Lake Creek or the Salmon River. So far, the results of those Redfish hatchery releases, measured in adult returns, have been dismal. Results of the natural spawning strategy in Pettit, with far smaller numbers, are so far more encouraging.

The program to restore Pettit Lake sockeye is complex, uncertain, but ripe with the possibility of success. And, the Shoshone-Bannock Tribes merit our confidence as leaders of that program, and as advocates for Congressman Simpson’s initiative.