The South Fork Salmon River is one of Idaho’s most ecologically important watersheds. The river and its tributaries like the East Fork South Fork provide critical habitat for Chinook salmon, steelhead and bull trout. The surrounding mountains provide important denning habitat for wolverines. Much like a younger, scrappier sibling of the Middle Fork Salmon River, the South Fork also provides world-renowned whitewater recreation opportunities. Sadly, the East Fork South Fork suffers from historic mining pollution with the Stibnite mining area in its headwaters, and the area faces another huge threat with a newly proposed project – the Stibnite Gold Project. Mining company Perpetua Resources is in the advanced stages of permitting a massive open-pit cyanide vat leach mine at the Stibnite site, raising alarm for all that rely on and enjoy this area. In a series of blogs, we investigate the impacts of this project on our beloved public lands, water, fish and wildlife, public health, and recreation opportunities.

The importance of bull trout

From wildlife to recreation to water and air quality, the proposed Stibnite Gold Project poses threats to many things Idahoans value. But bull trout will bear some of the biggest impacts if this project moves forward as proposed.

Bull trout are a native fish found in the cold, clear lakes, rivers, and streams of Idaho. Because Idaho has some of the coldest and cleanest mountain waters, Idaho represents a stronghold for the species. Even so, bull trout have been eliminated from 60% of their historic range, and in 1999, were listed as threatened under the Endangered Species Act – making it increasingly important that we do everything we can to restore degraded bull trout habitat and protect habitat that is still in good condition. Protecting bull trout habitat does good for more than just bull trout – because these fish require cold, clear streams, they are a good indicator for ecosystem health. By ensuring bull trout can persist, we protect healthy streams for other fish and aquatic species like salmon, steelhead, and other trout species.

The South Fork Salmon River: A stronghold for bull trout

The South Fork Salmon River ecosystem was once a thriving home for wild salmon, steelhead, bull trout, and cutthroat trout. Now, all are trending toward extinction. The South Fork Salmon River provides vital habitat for these fish, and deserves our best stewardship – especially if we want Idaho’s legacy of wild fish to continue. Right now, ensuring that future means speaking up against the Stibnite Gold Project, which according to the Forest Service’s Supplemental Draft Environmental Impact Statement (SDEIS), would have adverse impacts on all of these species, some of them permanent.

Perpetua Resources, the mining company proposing the project, and the Forest Service are downplaying the environmental impacts of the Stibnite Gold Project to bull trout, and instead highlighting the plan’s restoration aspirations. Yet, the SDEIS reveals that the mine as planned would actually further degrade habitat for threatened bull trout instead of improving it as hoped.

“Post-closure, a net decrease in quality and quantity of bull trout habitat would occur despite removal of passage barriers and an increase of lake habitat for bull trout…” (SDEIS Fisheries Specialist Report p. 150).

“Fish species composition and/or relative populations within the creeks in the SGP area may change after reclamation, as anticipated habitat may favor steelhead over Chinook salmon, and there would be a decrease in habitat for bull trout and westslope cutthroat trout and Chinook salmon. Therefore, fishing opportunities may be altered after reclamation as well.” (SDEIS, Section 4.12, p. 4-544).

Some of that direct loss includes the permanent loss of the Meadow Creek bull trout spawning area under 400’ of mine tailings.

Other streams could be too hot for fish due to increased stream temperatures. Like we stated above, bull trout are extremely sensitive to increases in water temperature. The SDEIS states that the Stibnite Gold Project would increase water temperatures in some places in the summer up to 6.8 degrees Celsius (about 12 degrees Fahrenheit) – making temperatures too warm for bull trout to survive and thrive. This forecast was also made without considering continued impacts of climate change, meaning that temperature would likely be even higher.

Riparian areas alongside streams provide shade and help keep waters cool for bull trout, but the removal of this vegetation for mining activities would leave nothing to shade these waters and fish. The Forest Service’s Story Map for this project, which aims to educate people on the project, discusses the link between riparian vegetation recovery and meeting fish habitat requirements:

Although the Story Map discloses that fish habitat will not be usable until vegetation restoration happens and temperatures in the streams cool, it does not discuss an alarming factor – there is a 100+ year time lag for riparian shading to grow.

The success of riparian planting is highly theoretical – water temperatures may never cool if the trees, plants, and shade are not reestablished, and 100 years of these temperatures would completely wipe out local bull trout populations. This is because the riparian vegetation needs sufficient amounts of high quality soil (also known as growth media) to grow. The low quality of most of the leftover soils and high arsenic levels in it will slow down vegetation growth:

“Overall, the majority of GM [growth media] used would rate as poor or fair (per suitability criteria), due primarily to texture and coarse fragment content (Tetra Tech 2019). These challenges, coupled with the harsh winter climate (short growing season) and generally steep slopes of the area, would compound the present difficulties in growing and/or maintaining persistent vegetation cover over reclaimed areas. This is consistent with the mixed vegetative cover success of nearby reclaimed mining areas and the previous efforts by Perpetua and others at the mine site to establish self-sustaining cover on previously mined lands that have had some limited success.” (SDEIS, Executive Summary p. 11).

“The overall relatively poor quality of the soils at the SGP mine site (outside of valley bottom soils), the long-term stockpiling of growth media (GM) or soil bank material, and the high background concentrations of metals in soils would affect the quality and suitability of available reclamation cover materials.” (SDEIS, Executive Summary p. 11).

In an effort to address this, Perpetua is going to be salvaging and stockpiling soil bank material from areas, mulching trees they clear, and composting what they can. However, the SDEIS discloses that so far they have only been able to come up with approximately half of the soil that would be required:

“Additionally, there would be a 797,702 bank cubic yards GM deficit at the mine site according to the balance calculations in the Reclamation Closure Plan. This deficit may be partially met with the surplus of material obtained from the Burntlog Route or could be met through additional composting of both on- and off-site soil amendments. Thus, there is presently some uncertainty regarding the specific source of material to meet the identified GM deficits under either action alternative.” (SDEIS, Executive Summary p. 12).

To be clear, Perpetua is still looking for sources of topsoil. But it appears that the Forest Service isn’t waiting for this issue to be addressed and is proposing to go ahead and permit the mine and hope that Perpetua will find the needed soil required for riparian and fish restoration components:

“However, Perpetua has committed to salvage the appropriate volume of GM and to create the volume of compost necessary as an amendment to provide suitable quality and quantity of the GM to cover the areas to be reclaimed. Perpetua has also committed to performance criteria tied to slope and soil stability, sediment, and vegetation cover, which would need to be met prior to release of a reclamation performance bond.” (SDEIS, Executive Summary p. 12).

If Perpetua can’t come up with the topsoil, the Forest Service will be able to use funding from Perpetua’s damage deposit to try to find the soil. The Forest Service is unlikely to have any more success than Perpetua in finding soil, and, as a result, the soil, riparian areas, and fisheries may never fully recover.

It is far better for Perpetua and the Forest Service go back to the drawing board now and revise the mine plan to take a closer look at soils from the beginning rather than proceed with a flawed project that will ultimately not be able to live up to the stated promises of returning public lands, waters and fish to productivity. 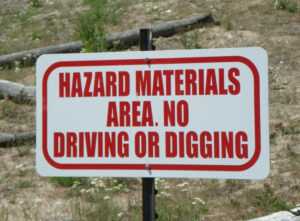 Water temperatures and vegetation restoration aren’t our only concerns. With plans to transport more than 9,400,000 gallons and 46,000 tons of hazardous materials to the mine site, spills of hazardous materials into our clean waters are likely to occur. Furthermore, both proposed access routes have segments exposed to landslide/rockfalls and avalanches, raising the probability of spills even further. Some of these hazardous materials include fuels, explosives, acids, cyanide, ammonium nitrate, lime, and more – all highly toxic to fish and humans. Should a spill occur and these materials bleed into the North Fork Payette River, the South Fork Salmon River, Johnson Creek, or the East Fork Salmon River or its tributaries, it could kill all fish eggs, fry, juveniles, and spawning adults. Despite this alarming possibility, the SDEIS has no project-specific spill risk calculations for number of spills and spill probability, which is usually an industry standard to disclose in Environmental Impact Statements.

The South Fork Salmon River, its tributaries, and the surrounding rivers are vital to our native fish, which already face a slew of threats. They need and deserve our protection. Speak up for this special place and the fish and wildlife that live there by submitting comments by Jan. 10 to the Forest Service, voicing your concerns for the Stibnite Gold Project.

For more information on writing comments, check out our first blog of the Stop Stibnite series here, or sign up for alerts on how you can help protect the South Fork Salmon River watershed. Remember to speak up for the South Fork by taking action below, and raising your concerns over the Stibnite Gold Project.