The future of fish and power

Snake River salmon and steelhead are among Idaho’s most iconic species once migrating upriver in the millions to Idaho, Oregon, and even Nevada. Now, because of blockages caused by hydroelectric dams and other factors, their numbers have dwindled.

They can still be found in the wildest corners of the state, such as the Salmon and Clearwater River watersheds and the Snake’s own Hells Canyon. As such, many Idahoans may feel that unless they recreate or live near these rivers, they have little connection to wild fish. But about a quarter of the state’s residents — 130,000 customers from Bonners Ferry to Soda Springs — have a direct connection to salmon through their electricity provider.

Idaho is home to 28 consumer-owned electric utilities (a municipal utility, operated by city government, or an electric cooperative) which tend to fall in more rural areas. This map shows the operating area of each of these utilities. 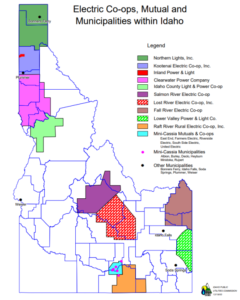 These utilities purchase the majority of their electricity from the Bonneville Power Administration (BPA), a government agency that sells power from the Northwest’s federally-owned hydroelectric dams. For decades, these dams have presented an existential threat to Snake River salmon and steelhead, reducing them to a small fraction (less than 1% in some cases) of their historic numbers. Most scientists in the region believe that the only way to restore these fish to meaningful abundance is to remove four dams on the lower Snake River in Washington.

Many advocates for keeping the dams in place argue that breaching would increase electric rates for utility customers in the region because the energy the dams create would need to be replaced by new resources at higher cost. However, there’s compelling evidence that breaching the four lower Snake River dams would actually save customers money.

First, renewable energy technologies continue to improve and get cheaper. It’s already cheaper to construct a new solar or wind generation facility than add onto an existing fossil fuel facility, and prices are widely expected to continue to drop. Building more distributed generation is also safer, providing better reliability and security for Idaho utilities that are far away from the federal dams in Washington. A recent study by the Northwest Energy Coalition concluded that the Snake River dams could be replaced by a combination of renewable generation and energy efficiency, and improve stability in the Northwest’s electrical grid. 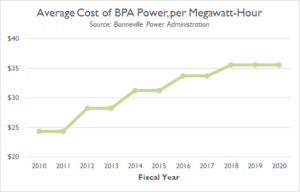 Second, the power sold by BPA and the federal government has grown more and more expensive. BPA’s customers pay the full cost of hydroelectricity, which includes a massive fish and wildlife program designed to mitigate the dams’ effects on Northwest salmon and steelhead. In 40 years, that program has burned through nearly $18 billion and failed to move a single species of Northwest fish off of the endangered species list. Each month, when customers get their electric bill, about a quarter of what they pay is going to this failed and inefficient program. Because of this, there’s a growing risk that BPA could be ordered to spend more on fish mitigation measures by a court or Congress. That would increase what customers pay and still might not be enough to recover fish.

When the federal government started building hydroelectric dams in the Pacific Northwest, they intertwined their energy system with the vast runs of salmon and steelhead that moved up and down the Columbia and Snake Rivers. Now, these runs are at risk of extinction. That puts the dams and BPA on a troubling cost trajectory, with the potential to worsen. The simplest and cheapest way to save both fish and BPA is to breach the four lower Snake River dams. This, with a continued mitigation program for other dams in the system, will restore Idaho’s fish to abundance and give BPA and its customers certainty in future energy prices.

All 28 of Idaho’s consumer-owned electric utilities are in negotiations with BPA right now about their next series of contracts to purchase power. This is the moment to move toward a more prosperous future for all of Idaho’s communities that depend on abundant returns of salmon and affordable sources of electricity. Members of consumer-owned utilities can determine that future for themselves, and reduce their electricity costs for years to come.

For specific information on how to contact your utility, visit idahoconservation.org/fishpower and choose your electricity provider from our list!