Touring mining reclamation in the headwaters of the Jarbidge River

Last month, I had the opportunity to travel to one of the more remote areas in the Lower 48 to check in on ongoing reclamation efforts at a gold exploration project in northern Nevada. An Australian mining company, Newcrest Mining Limited, had been exploring for gold near the historic mining town of Jarbidge and the headwaters of the Jarbidge River for the last two years, but earlier this year, decided to terminate their project based on failure to find sufficient economic minerals deposits in their initial exploratory drilling. 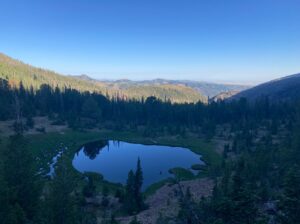 The Jarbidge River begins in northern Nevada and flows north into Idaho to eventually join the Bruneau River. Both the Jarbidge and Bruneau are world class whitewater canyons and designated Wild and Scenic Rivers. The Jarbidge watershed also supports the southernmost population of bull trout in the Lower 48, a species that is federally listed as threatened under the Endangered Species Act.

ICL and our conservation partners at Idaho Rivers United (IRU) have been involved with this project since it was permitted in 2020, when we secured additional safeguards for bull trout and water quality when the project was approved. Now that Newcrest is no longer pursuing gold exploration at this site, they are required under their permits to fully reclaim any drill pads and temporary roads that they constructed while searching for gold the last two drilling seasons. ICL and IRU toured the Jarbidge project site with staff from Newcrest and the U.S. Forest Service to observe the progress of reclamation activities.

Standing out in the hot Nevada sun, we were impressed with what we saw — both in terms of the wilderness scenery and the reclamation progress on the ground. Active reclamation is underway for drill pads and temporary roads in the Jack Creek drainage, an important area for bull trout. Because of our involvement, Newcrest ended up constructing far fewer roads than originally proposed. The easiest road to reclaim is one that was never built. For the roads that were built, we saw firsthand the exploration roads that were reclaimed, recontoured, and reseeded. The fact that it was hard to tell that there ever was a road at the site that was reclaimed two years ago (except for the absence of sagebrush, which takes several years to recolonize) is a testament to the success of the reclamation thus far. Newcrest is required by the USFS to monitor their reclamation efforts for three growing seasons before their reclamation bond is released.

Newcrest raised the bar for environmental commitment and compliance throughout the life of this exploration project. The company was willing to accept nearly all of our suggestions for additional monitoring and mitigation measures. The company also made public their water quality monitoring data and followed their operating plans appropriately while the project was underway. Newcrest has demonstrated that it is possible to go above and beyond the minimum environmental requirements under law and still achieve their exploration objectives.

We expect that every mining company who operates in Idaho or its surrounding watersheds will demonstrate a similarly robust environmental commitment and high bar of environmental compliance from cradle to grave on their projects.

Despite the recent positive developments at the site from an environmental perspective, until the Mining Law of 1872 is reformed, places like the Jarbidge River will remain at risk from mining impacts from other operators. But at least for now, this specific threat is no more and current reclamation activities appear to be on track. ICL will continue to work across the state to raise the bar on mining projects where risks can be managed while opposing irresponsible mining projects in highly sensitive locations that could have significant long-term impacts to public health, fish, wildlife, and other resources.

If you would like to stay in the loop on this and other projects, please sign up here for regular updates on ICL’s public lands work.