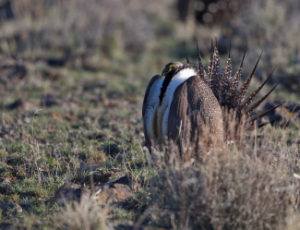 Recently, my wife Nancy and I drove to a favorite Greater Sage-Grouse lek to watch and photograph the birds act out their timeless, ancient mating rituals. We didn’t see anyone else out there so no need to practice social or physical distancing. By definition, you go where people aren’t to find Greater Sage-Grouse leks.

You’ll forgive me if the location remains undisclosed. It’s all too easy to disturb the birds. They are an endangered species in all but the strictest legal sense. About 95% of the populations of a hundred years ago are gone, a victim of our destruction and alteration of their habitat. Sage grouse are sagebrush obligates; they must have access to healthy areas of sagebrush to survive. Agriculture, wildfire, invasive species and overgrazing have destroyed and fragmented the sagebrush steppe that formerly dominated the Intermountain West. 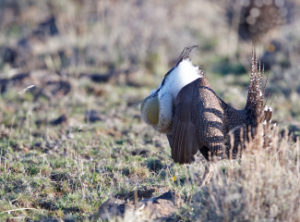 But the Greater Sage-Grouse still hang on, if in sadly smaller numbers, and still perform their marvelous courtships in Idaho’s wilder nooks and crannies. In a relatively small area, the males gather and compete for mates in what ornithologists call the “Strutting Display.”

Before dawn, the males begin the Strutting Display. I’d describe the dance as a crowd of sage grouse spread over an acre or so of thinly-vegetated land. All holding themselves stiffly upright, walking around with tiny mincing steps while inflating their chests. All making a kind of “paloop, paloop” sound. As they inflate their chests, a pair of otherwise invisible orange skin patches appear, bulge out and disappear. 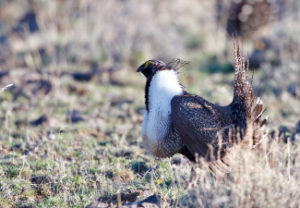 There are occasional squabbles when invisible territorial lines are crossed within the lek, but overall it’s important, solemn and very serious business. And utterly charming to watch.

Remember, there is a crowd of males going through this exercise. The air is full of “paloop, paloop” sounds. It’s all about giving your very best display to the hens shopping for a mate. One or two birds dominate the mating, but that doesn’t stop the other males from trying hard.

After eight weeks or so, the excitement is over and the birds return to their mostly secretive lives. Their cryptic coloration makes them hard to find; their low density makes them scarce. For a bird photographer, Sage Grouse are a rare species after lekking is over.

Sage grouse – both Colorado’s Gunnison and Idaho’s Greater – are in deep trouble. Their populations in many areas have declined to the point that they are vanishing. Worse, their habitat is being destroyed.

Can we agree that this species deserves to be saved? Can we agree that, as important as fossil fuels and minerals may be to our economy, keeping this iconic species around is even more important? If so, and after all the laws on the books say that’s what we should do because of the Endangered Species Act, then we simply cannot afford to destroy any more Sage Grouse habitat. In all the complexities surrounding the ecology of the Intermountain West, that’s surely the easiest task.

And there’s a bonus. There are 30-odd other species that are sagebrush dependent, too. Save the sagebrush and you save them as well… if you need any additional incentive.