Will Governor Otter Stand Up for Salmon and Steelhead?

November will mark the inauspicious 27th anniversary of Snake River sockeye salmon’s inclusion on the endangered species list. As of mid September, 11 wild sockeye have returned to their spawning grounds in the Sawtooth Valley. In case you’re wondering, that’s not promising.

Steelhead just hit 21 years on this sad list. Last year saw  one of the lowest steelhead returns ever; and   recent numbers out of the University of Washington show that this year looks worse. 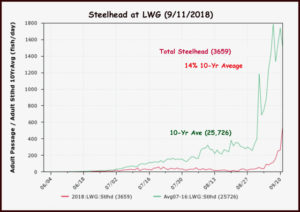 Amidst this dismal picture for Idaho’s fish, Gov. Otter is considering signing Idaho up for four more years of the status quo. ICL believes the governor can, and should, do more. Let me explain.

The majority of money spent in Idaho on improving the plight of our endangered fish comes from the Bonneville Power Administration as part of a federal legal requirement that BPA mitigate damage to fish and wildlife caused by its operation of dams on the Columbia and Snake Rivers. In 2008, Idaho signed what is commonly known as its Fish Accord with BPA; the accord has provided tens of millions of dollars for habitat restoration and other fishery projects all across Idaho.

The other Northwest states and numerous tribes also have fish accords, and much of the specific work funded by the accords has been successful in its respective locations. However without a different federal approach to river management throughout the Columbia River Basin, there is only so much that Idaho, or any state or tribe, can do on its own. Thus, the dismal fish return numbers we keep seeing.

The accords all expire on Sept. 30, and BPA just released draft accord extensions. Gov. Otter is prepared to sign Idaho up for a 4-year extension of Idaho’s accord. This extension provides Idaho approximately $16 million/year to continue its work. In exchange, Idaho commits to “affirmatively support” the approach of federal agencies to complying with the Endangered Species Act, the National Environmental Policy Act and other federal laws. The same approach that, so far, has led to lower and lower numbers of endangered fish.

The accord extension has “off ramps” should Idaho want to assert its independence on the matter. If the off ramps are taken, the money disappears and Idaho’s fish and the people who rely on them suffer.

Gov. Otter is notoriously skeptical  of the federal government. His own website says he’s committed to “fighting the misguided efforts of DC bureaucrats to usurp state management of species under the Endangered Species Act.” He prides himself on representing Idaho’s rural citizens and our strong outdoor heritage, as well as being responsible for making Idaho business friendly. Theoretically, few things combine these commitments better than salmon and steelhead.

Otter could sing quite a swan song as the governor who stood up to federal mismanagement of Idaho’s iconic fish and got the best deal he could – or he can take what’s being offered him and pass it on to this successor. His choice.

If you’d like to see Gov. Otter be a leader for Idaho’s fish and seek a better deal than is currently offered in the draft accord, let him know. You can email, call or write him. But do so before Sept. 26 when the draft accord is likely to be signed. The objection is not a lack of value in the work funded by the draft accord; it’s that the draft accord requires Idaho to defer to the feds during the 4-year extension of a status quo that has not helped reverse declining fish numbers year after year.

Extinction on the Horizon

This new Fish Accord is only a part of the bigger picture. No matter what, the end is near for many of these endangered species if something doesn’t change. It’s not an exaggeration to say that Idaho’s next governor has much work to do if he or she does not want a legacy of salmon and/or steelhead extinction.