Work hard. And laugh, too.

Some of the best political advice I’ve heard for the New Year is to keep laughing. For 2019, I’m going to hold to that.

New York Times columnist and lifelong Northwesterner Tim Egan says in his most recent essay, "There has never been a more darkly comic person to occupy the White House."

I agree. It was the 2016 election that led me back to trawling for Saturday Night Live clips on the internet. To be honest, it took the 2016 election to make SNL funny again. If Facebook is selling a particular aspect of my personal data, which I hear they are, the biggest nugget is that I click on every late night TV monologue that is making light of the times we’re in. I’m not sure what the Russians can do with that, but have at it.

"Comedians are truth tellers," Egan says. Journalists are fact checkers, he continues, and right now, as important as the fact checking is, that only reaches so many people. What we need most is a good dose of truth telling.

The best politicians are, in fact, funny. In my brief visit with Pres. Obama in the Oval Office for the Boulder White Clouds bill-signing, after the official act his descriptions of learning to fly fish, and what to do once you catch a fish, provided honest laughs, humanizing an already deeply human man. As Egan quotes him, "I look in the mirror and say, ,I’m not the strapping young Muslim socialist I used to be.’"

Our president today is not exactly known for humor. He challenged a seven-year old’s belief in Santa Claus. Now, like the times we’re in, that’s not funny. But like an SNL skit, the telling of the story has an ouchy feel to it that’s darkly, well, funny. The fact that the president clearly doesn’t think any of this is funny makes it all the funnier.

To be clear, there’s not a thing – nothing – about today’s environmental news that’s funny to me. Climate denial? The gutting of EPA? Extinction? National monument rollbacks? Not funny. Kinda deadly serious stuff.

But I am all in for humor right now. For years my office has featured a couple cartoons I purchased from the New Yorker. My long-time favorite is Gahan Wilson’s image of a couple on a front porch looking out over a blasted landscape. 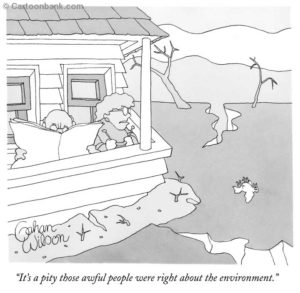 As her husband remains buried in the newspaper, the woman looks at the scene and says, "It’s a pity those awful people were right about the environment."

I think that’s hilarious. I’ve used it in countless slide shows because it’s SO true. Many environmentalists are humorless. Everything is gloom. As many years of this work has shown me, gloomy people don’t inspire people. I guess there’s an exception to this: The current president. I think the president – in addition to providing a vehicle for humor – is a gloomy person who has inspired a great deal.

Remember the Women’s March right after the inauguration? The followup was just yesterday when the U.S. House of Representatives swore in the largest number of woman representatives and the greatest racial diversity in American history. The first person to recapture the speakership in 50 years was also elected – yes, a woman. The times we’re in and the leader we’re watching, gloomy or not, prove to be profoundly inspiring.

As we move into what will surely be an historic year for our country, climate and environment, we’re going to get into a lot of very serious work. We will take that work seriously every single day, but hopefully, we’ll have a moment where we can take ourselves a bit less seriously. I think we’ll need it. In the meantime, if you see a good clip, shoot it my way.