As the Idaho Legislature picks up speed in its third week some issues-public lands and their access, mining, water quality and more-are coming into focus. At the same time, rumors about those very issues are bouncing around the Statehouse like electrons in an atom. Speaking of science, the revised Science Standards will be up next week in a two-day marathon hearing in the House Education Committee. If you care about Idaho’s schoolchildren-a.k.a. our future-I encourage you to attend. Read more on this issue below.

Rules In, Rules Out

During the first several weeks of the session, committees focus largely on agency rules that have been drafted in the preceding months. In most cases rules are approved. However this week, the House Resources Committee rejected a rule requiring mandatory reporting by hunters, as well as a draft bill from the Idaho Department of Lands that related to mineral royalties. Similarly, an Idaho Department of Fish and Game bill that would have limited liability on private lands was withdrawn due to concerns from trial lawyers. It is expected to return with revisions.

The relevant House and Senate committee approved a rule from the Idaho State Department of Agriculture that will allow field burning when background conditions are unhealthy. Despite concerns from the American Lung Association, Safe Air for Everyone, ICL and medical experts, it appears that the EPA is set to approve these rules  which will put sensitive populations at greater risk (elderly, youth and those with bronchial issues).

Wolves, Still on the Menu

The Idaho Wolf Depredation Control Board has more than $1 million on hand, yet still wants another $400,000 to kill wolves. The Idaho Wolf Control Fund, established in 2014, relies on taxpayer money, as well as smaller contributions from hunters and livestock producers to reduce wolf populations when wolves prey on cattle, deer or elk. Since 2014, the state has killed 177 wolves at a rate of $4,000 for every wolf. Despite the fact that non-lethal measures such as guard dogs, range riders and fladry (colorful flags) can be very effective at reducing predation, the funds can ONLY be used for lethal control.

As I reported last week, Idaho’s school science standards haven’t been updated since 2001. The current standards are woefully deficient. The State Department of Education and State Board of Education have submitted revised standards to the Idaho Legislature each year since 2016, only to be rebuffed. Now, the standards will be up for testimony and consideration in the House Education Committee on Thursday, Feb. 1, and Friday, Feb. 2. Here’s a good synopsis of how Science Standards went down last year.

Tie of the Week 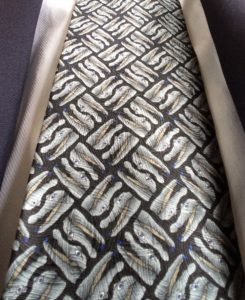