Have We Been Here Before? Yes, It’s Groundhog Day!

Just like in the movie Groundhog Day, it seems like we’re stuck on a carousel with the same day happening over and over and over. Except in the movie, the character played by Bill Murray learned from his mistakes and got smarter with each repeating day. With the science standards, we go through the same motions year after year, but no one seems to be getting smarter.

As I’ve previously reported, the Idaho State Department of Education has submitted revised K-12 science standards for the third consecutive year. And for the third year, the House Education Committee remains skeptical over inclusion of climate science, despite thousands of supportive comments and passionate testimony from students, teachers, business leaders, scientists and parents.

After two days of contentious hearings (the first marked by committee confusion over what they were even considering), the committee may now seek to block all or a portion of the standards. We thought the House Education Committee would act today, but they kicked the can down the road and will decide later. Fortunately, even if the House doesn’t act, the Senate Education Committee could approve the standards as written. Because it’s a "pending permanent" rule, both the Senate and House need to concur on any amendment or rejection. If the two houses disagree, the new standards would go into effect. Stay tuned for the next fun-filled episode of As Idaho’s Science Standards Turn.

This week, the House Resources and Conservation Committee printed a bill that would allow motorists  to put injured animals out of their misery if they are unintentionally "severely wounded" by said motorists. The bill seems to be pretty straightforward and consistent with humane practices to prevent unnecessary suffering. Still, the Idaho Department of Fish and Game and sportsmen are concerned that this could be used to cover up poaching, which significantly affects many wildlife populations across the state. ICL is studying implications of the bill before we take a formal position on it. A hearing may be scheduled next week.

Air and Water Under Threat

Two efforts are in process to undermine existing protections for the air we breathe and the water we drink. First, Sen. Jeff Agenbroad (R-Nampa) and Reps. Jason Monks (R-Nampa) and Gayann DeMordaunt (R-Eagle) have introduced a bill  to exempt all vehicles made from 2007 forward from vehicle emissions testing. Second, Rep. Lance Clow (R-Twin Falls) has introduced a measure to eliminate any testing requirements for backflow preventers. These devices ensure that nonpotable irrigation water doesn’t infiltrate drinking water. These measures move us backward in keeping our air and water clean; they should be closely scrutinized in the coming weeks.

The Roadless Commission bill  sailed through the House with no opposition and will likely be heard in the Senate Resources and Environment Committee next week.

Also, the House State Affairs Committee printed a bill from Rep. Paul Shepherd (R-Riggins) to allow the Idaho Legislature, by simple majority, to nullify federal laws and Supreme Court rulings. Contrary to Shepherd’s proposal, I carry a document in my pocket every time I enter the Statehouse that declares, "This Constitution, and the laws of the United States…shall be the supreme law of the land." The same committee also printed a resolution supporting a constitutional convention. In recognition of our nation’s founding document, I give you my Tie of the Week! Esto perpetua! 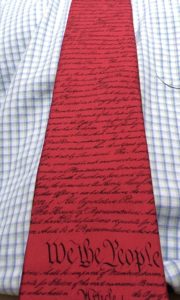