Fast and Furious at the Statehouse

The Idaho Legislature has rounded the bend and is picking up speed into the straightaway.  Dozens of new  bills were introduced  before the self-imposed deadline. Bills dealing with e-bikes, poisonous plants, ATVs, snowmobiles, hunting, wilderness, local building codes  and trespass laws were advanced this week, not to mention action on other big ticket items like the Idaho health care plan, the constitutional convention, a new tax cut  and more. Attend our  legislative reception next Monday, Feb. 12, to learn more about these issues.

After three years, unanimous votes of the State Board of Education, unanimous support from a committee of award-winning scientists, supportive comments from 1,000 Idahoans (only five opposing), the  House Education Committee finally voted  on the K-12 science standards.

Did they listen  to the State Board of Ed? Nope. The State Department of Education? Nah. All the testimony in favor? Meh. Teacher of the Year? As if. Monsanto’s lobbyist and former chair of the State Republican Party? C’mon.

They listened to the voices inside their heads and voted to strip away a full third of the  science standards document. Specifically, they erased one standard related to energy and fuel use because it mentioned negative effects from deforestation, mining and fossil fuel use. And  they removed ALL supporting content, the part of the document that provides the roadmap for how teachers ensure that students are achieving the standards.

Rep. Scott Syme (R-Caldwell) told the  Spokesman-Review, "I don’t care if the students come up with a conclusion that the earth is flat-as long as it’s their conclusion."

Now the issue moves to the Senate where rules can be advanced over objections of the House and the  proposed science standards could remain whole. We’re asking our senators to do just that and  you can too!

Sen. Jeff Siddoway (R-Terreton) and Rep. Van Burtenshaw (R-Terreton) introduced a nonbinding memorial  asking Congress to pass a law  that new wilderness or national monuments in Idaho must have the blessing of both the U.S. Congress and Idaho Legislature.

Although  Idahoans across the state are working together in collaborative forums to find solutions, some Idaho legislators want to drag us back to the resource-wars of the 1980s.

Rep. Phylis King (D-Boise) has worked for several years to clarify the law for electric bikes, known as e-bikes. State law considers these motorized bicycles in the same class as mopeds and motorcycles. So you must have turn signals, brake lights and a drivers license to operate one, and you can’t use bike lanes or paths. E-bikes are a fast-growing segment of bike sales, and  local governments should be able to decide whether e-bikes can use paths, sidewalks and greenbelts.  King’s bill, introduced in the House Transportation Committee would do just that.

This week’s tie is dedicated to the  1,000+ volunteer hours that members of the Idaho Science Committee put in  (over three years) to develop, refine and advance revised science standards, only to see them scrubbed by the House. Until next week,  esto perpetua! 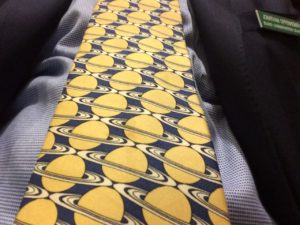