Time is moving fast in the Idaho Legislature, so that MUST mean that I’m having fun, right? The Legislature is approaching the self-imposed March 5 deadline to transmit bills from the House to the Senate and vice versa. That means we’re moving closer to adjournment. Given some of the threats to our air and water, it can’t come soon enough!

Despite opposition from the Association of Building Code Officials, Association of Idaho Cities, Idaho Association of Counties, Idaho Power, ICL and others, the House Business Committee approved  HB 547  and sent it to the floor, where it passed on Friday by a wide margin. The bill would restrict communities from establishing building codes that meet their local needs. I thought the party of Lincoln was committed to “local control”?   The bill now moves to the Senate, where we’ll be working as a member of a coalition to retain flexibility at the local level.  Take action today  to let the Senate Commerce and Human Resources Committee know how you feel.

Backflow Bill Would Have Sickened Idahoans

Backflow prevention devices keep tainted water out of your drinking water supply lines. Without a backflow prevention device, a change in water pressure could lead to irrigation or untreated water in your tap, causing sickness or even death. Rep. Lance Clow (R-Twin Falls) introduced a  measure to remove the requirement  for annual testing of these devices. Dozens of cities and water quality managers showed up to testify, along with ICL. The good news is that the House Business Committee listened and rejected Clow’s proposal.

Bullies Target ITD – And Harriman State Park Could Be Axed

According to  reports in the  Idaho Statesman, a bill that would strip authority from agency boards and put decisions in the hands of the governor has nothing to do with the substance of the bill. Instead, it has everything to do with punishing the Idaho Transportation Department for not funding a few legislators’ preferred highway projects.

Currently, directors of the Idaho Transportation Department, Idaho Department of Corrections, and Idaho Department of Parks and Recreation are selected and appointed by boards that govern each respective agency. The bill, sponsored by Rep. Joe Palmer (R-Meridian), would shift responsibility for hiring the directors from the boards to the governor. As a result, the terms of the Harriman family’s gift of the 11,000 acres that make up  Harriman State Park in East Idaho could be threatened.

Former staffers from the office of U.S. Sen. Frank Church, along with the Idaho Outfitters and Guides Association, testified on the history of the Wild and Scenic Rivers Act and its significance to Idaho. A vote on the House floor is expected next week. (It has already passed the Senate.)

A revised trespass bill introduced by Rep. Judy Boyle (R-Midvale) is still in review, and it will likely still concern hunters, anglers and others. Another measure from Rep. Priscilla Giddings (R-White Bird) could have county officials revving up their bulldozers to reopen roads on federally administered public lands. It was sent to the House floor for amendments following testimony from ICL, where I highlighted questions that the Attorney General’s office had raised with the bill. Finally, a bill from Rep. Phylis King (D-Boise) that would have defined rules for electric bikes failed to get out of committee.

Emissions testing keeps our air clean. Unfortunately, Rep. Palmer has a bill that would put more pollution into the air. It’s supported by Sens. Marv Hagedorn (R-Meridian), Jeff Agenbroad (R-Nampa) and others. This week’s tie is dedicated to Idahoans who keep their vehicles running clean. 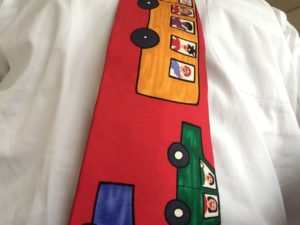