YVC: Heading for the Door

As the Legislature moves toward  adjournment (known as  sine die, Latin for “without day”), there is a palpable sense of haste at the  Statehouse. Legislators are ready to conclude their business, pass agency budgets  and return to their districts to campaign. While a few issues are still outstanding, we are definitely at the tail end of the session. But this weekly  YVC email will continue until the final gavel falls.

After the session ends, I also send a legislative report to our members. If you’re not already a member,  join ICL  today  to  make sure you receive my wrap-up.

It’s not every year that the  Legislature recognizes land and water protection  (#understatement). This year, with leadership from Sens. Dan Johnson (R-Lewiston) and Michelle Stennett (D-Ketchum) and Reps. Rick Youngblood (R-Nampa) and Steve Miller (R-Fairfield), they did just that.

This week, the House followed the Senate’s lead and passed a resolution that recognizes the Wild and Scenic Rivers Act, a  law protecting some of Idaho’s magnificent rivers, including the Lochsa, Salmon, Selway, Snake and St. Joe.

The Wild and Scenic Rivers Act prohibits dam building and ensures the free-flowing nature of American’s most beloved rivers. The law was over a  decade in the making, under the leadership of U.S. Sen. Frank Church from Idaho, and arose largely from Idahoans’ concerns over the "Oxbow Incident" on the Snake River, when fish-saving measures failed, leaving thousands of salmon and steelhead floundering below the Oxbow Dam. Ultimately, fish passage measures were abandoned, and salmon no longer swim in their native waters above Hells Canyon.

The  resolution recognized the role of Idahoans  in the Wild and Scenic Rivers Act and celebrates the 50th anniversary of the law.

Last week, I reported on the progress of a bill that could result in the  loss of one of Idaho’s treasures  – Harriman State Park. Despite claims from Rep. Joe Palmer (R-Meridian) that  he would push forward with the bill  without amendments, it has been sitting on the amending order. We expect the bill to be returned to the State Affairs Committee,  where it will, almost assuredly, remain until the end of the session. Keep your fingers crossed!

Following the withdrawal of a prior bill that contained numerous constitutional issues, a  revised bill was introduced  this week. While it may address some of the constitutional concerns, the bill would eliminate the requirement to post private land, require written permission slips issued by the Idaho Department of Fish and Game, and require accused trespassers to cover the "investigatory costs" of the landowner, which according to the Attorney General, could  lead to "absurd requests."

The  Idaho Sheriffs’ Association noted concerns that the bill would "over-criminalize" otherwise benign activity. Several issues remain, and today the House delayed debate on the bill until Monday at the earliest. If the bill makes it to the Senate, we expect it to receive in-depth review.

Based on intel from Senate Commerce and Human Resources Chair Jim Patrick (R-Twin Falls), a hearing will be held on the  building codes preemption bill  on Tuesday. We also anticipate no further action on a bill to  exempt vehicles from emissions testing. Finally, the budget committee today approved full funding of $200,000 for the wolf control program,  despite the $744,000 still on hand from prior years.

The Tie of the Week honors the Idaho  tradition of enjoying outdoor pursuits across the state. Unfortunately, if the trespass bill passes, such pursuits could become more difficult – and costly – if you unintentionally take a step across an unmarked property line, like the hunter on my tie. 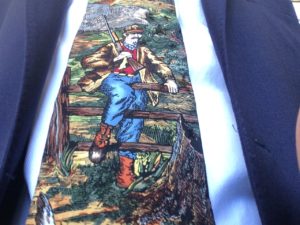