YVC: The Other Shoe Dropped

We had a good run: the science standards were finally approved, the roadless commission bill sailed through, and the Wild and Scenic Rivers Act resolution was adopted without debate. So it was only a matter of time before the other shoe dropped. This week it did. The good news is that the Idaho Legislature is wrapping up its business … the sooner, the better!

Take note – while the weekly YVC blog continues until the final gavel falls, I encourage you to join ICL, if you’re not already a member, to get the end-of-session report that we send out by mail to our members.

So Much for Local Control

Despite last week’s report and assurances from the Senate Commerce and Human Resources Committee chair Jim Patrick (R-Twin Falls) that the building code preemption bill wouldn’t have a hearing, it did this week. Opposition from local building officials, architects and energy-efficiency advocates was enough to warrant an amendment but not enough to stop the bill. Because the amended bill only restricts the ability of local municipalities to amend energy efficiency codes, ICL remains strongly opposed. The question now is whether the amended bill will be considered before the Legislature adjourns. We hope the answer is no!

Amendments to Trespass Bill on Deck

Widespread concern from sportsmen, sheriffs, prosecutors and others resulted in a robust Senate Resources and Environment Committee hearing on Rep. Judy Boyle’s (R-Midvale) trespass bill. Based on additional concerns from a number of senators, the bill was sent to the Senate floor for amendment. The amendments will be considered in the Senate on Monday. Though they will improve the bill, they won’t fix it.

Rep. Megan Blanksma (R-Hammett) introduced a proclamation this week that would have the state cover the attorney fees for private livestock companies from a case that the Idaho Supreme Court decided in 2007. The state’s Constitutional Defense Fund covers costs, usually associated with defending state laws found unconstitutional (such as ag gag, horse racing and prohibitions on same-sex marriage). Since its creation in 1995, the state has paid out over $2.7 million in settlements and legal fees from losing cases. As the Attorney General explained in a letter to the ranchers in 2009, using state funds to cover private legal fees was unconstitutional then. One thing that hasn’t changed from 2009 … it’s still unconstitutional. Nevertheless, the State Affairs Committee advanced the measure to the full House with a "Do Pass" recommendation. Go figure.

It Wasn’t All Bad – Harriman Is Safe!

No doubt, it was a challenging week, but there was a bright spot! House Bill 496, a bill that threatened to unravel Harriman State Park, was sent back to committee.

Tie of the Week

The Tie of the Week recognizes several things – the Idaho Conservation League’s power comes from the people, the tie exemplifies the building codes issue and it meets the criteria (in some people’s eyes) for an ugly tie. There is a rich tradition in the Statehouse to wear ugly ties toward the end of the session to encourage legislators to head home. If you think this one’s ugly, you ain’t seen nothin’ yet! Until next week, esto perpetua! 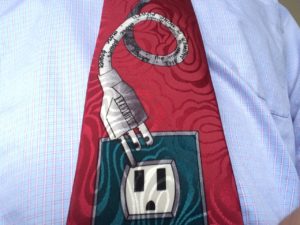