YVC: Inching Toward the Finish Line

The Legislature is crawling toward the finish line – and not a moment too soon. In the (almost) final week, several troubling measures were adopted, and  at times, it felt like we were whistling into the wind. We expect headwinds in the Idaho Legislature, but there is no question, the last two weeks were especially brutal.  Still, as Winston Churchill said, “Kites fly highest against the wind!”

Come next January, we’ll have a number of  new faces  in the Idaho Legislature.  Until then,  ICL will  identify issues, develop new ideas and connect with decision makers to advance conservation in 2019.  After all, it’s only 291 days until the next Idaho Legislature convenes. For now,  I’m trading in my wingtips for my hiking boots and hitting  the trails!

Take note – while this is my last weekly YVC, I encourage you to  join ICL, if you’re not already a member, to get the end-of-session  report that we send out by mail to our members.

The  building code preemption bill  was amended and passed by both the House and Senate this week. As a result of an amendment that  limited the ability of local municipalities to update energy efficiency codes, cities and building officials dropped their opposition. Despite ICL’s continued opposition, the revised bill sailed through the House without a single vote against it.

Widespread  concern from sportsmen, sheriffs, prosecutors, conservationists and others wasn’t enough  to slow Rep. Judy Boyle’s (R-Midvale)  trespass bill. While the  Senate amendments addressed some concerns  with the bill, it remains problematic and could lead to increased confusion, citations and court costs for otherwise benign activities.

House Proclamation 1, introduced last week by Rep. Megan Blanksma (R-Hammett),  encourages the state to use a public fund to cover attorney fees for private livestock companies. The attorney fees are from a case that the Idaho Supreme Court decided in 2007.

Since 1995, the taxpayer-funded Constitutional Defense Council (CDC) has paid out more than $2.7 million in settlements and legal fees for cases that the state of Idaho lost. As Idaho’s attorney general explained in a  letter to the ranchers  in 2009,  using state funds to cover private legal fees is unconstitutional.

That wasn’t enough to slow the proclamation down in the House or the Senate, where  it passed by wide margins. Now, the  question is whether the CDC will actually fund the $600,000 bills. The CDC includes the attorney general, so we hope that he has more luck than we did in encouraging compliance with the Idaho Constitution.

The Tie of the Week recognizes the  rich tradition in the Statehouse of wearing ugly ties  toward the end of the session to encourage our legislators to head home. Not only is this one ugly, it’s one of my widest, it’s an antique and it’s 100% dacron polyester.

Until next January,  esto perpetua! 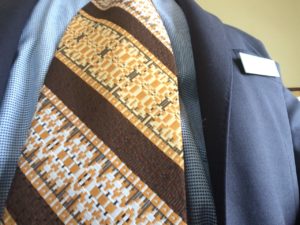