During this second week of the Legislature, we’re certainly not experiencing the same temperatures and snowfall of early 2017. Last year, some legislators may have concluded that the "Snowpocalypse" disproved climate change. Although there’s a big difference between weather and climate,  some people still don’t get that.

What everyone SHOULD get is that Idaho is overdue to modernize school science standards to include climate change and other well-established scientific principles.

Current standards are 17 years old and  received a failing grade  for "their almost total disregard for the essential content necessary to educate children in the sciences."  What’s more, nearly 4,000 STEM (science, technology, engineering and math) jobs in Idaho were left unfilled  in 2016. That same year, concerns over the age of the earth, formation of the solar system and climate change tanked the rules.

Nonetheless, the State Board of Education persisted-and resubmitted them in 2017. During deliberations, a majority of the House Education Committee asked the committee of Idaho science teachers to take another look at  five paragraphs related to climate change. A robust public process followed, with statewide meetings and more than 1,000 comments being received (99+% in support of these standards).

The committee has made a couple tweaks, and the rules will be back before the Legislature in the coming weeks. Let’s hope that the third time’s the charm!

Last year, the Legislature boosted funding and advanced a bill to increase attention to the threat posed by invasive zebra and quagga mussels. The snails infest and clog waterways, canals and streams, and they could cost Idahoans millions of dollars annually if they become established in our state.

Despite strong support in the Statehouse, Gov. Otter vetoed the bill to establish an invasive species coordinator. Still, increased state and  federal funding  was delivered, and the Idaho Department of Agriculture, which manages the program, stepped up coordination with neighboring states and new boat inspection checkpoints.

To date, these efforts have been successful at catching and preventing the introduction of these harmful species, so it’s unlikely that we’ll see legislation again this year.

In 2008, the Idaho Roadless Rule was finalized, protecting millions of acres of undeveloped national forests. The rule also allowed for temporary roads and thinning to reduce wildfire risk around communities. The rule has been effective at protecting these areas, while still allowing for reasonable access.

Part of the reason it’s remained effective is because the Idaho Roadless Rule Commission reviews Forest Service projects and provides feedback to improve the projects and ensure consistency with the rule. The commission exists thanks to executive orders, which must be renewed every 5 years. Since the Idaho Roadless Rule is here to stay, Gov. Otter has proposed a bill to establish the State of Idaho Roadless Rule Implementation Commission as a permanent body. We see this as a good example of state, federal and private stakeholders working together to protect some of the most special places in Idaho.

In the coming weeks, the Legislature will also be considering a proposal to  fund and extend the work of the Idaho Wolf Control Board, which has cost Idahaons about $4,000 for every dead wolf. Legislators may also consider proposals about wilderness study areas, electric bikes and access issues. The  BSU public policy poll was also released this week, providing insights into the minds of Idaho voters.

Since 1973, ICL has sent a lobbyist to the Statehouse to advocate for the air you breathe, water you drink and lands you love. For years, ICL was a lonely voice in the political wilderness. This week, my Tie of the Week recognizes the growing cadre of professional advocates like Conservation Voters for Idaho, Idaho Wildlife Federation, Trout Unlimited and Idaho Walk-Bike Alliance. Working with partners, members and supporters, we will  keep Idaho Idaho. 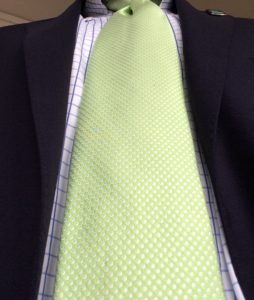