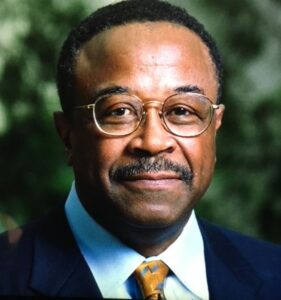 Dr. Thomas “Les” Purce is a living icon for Black history in the Gem State, a barrier breaker whose work has had impacts across all of Idaho and into neighboring Washington.

Purce is a third-generation Idahoan and the grandson of pioneering Black Idahoans who came to Idaho in 1909. He grew up in Pocatello and received graduate and undergraduate degrees at Idaho State University.

Purce has a track record of leadership, both in academic careers and public service. He became the first Black man to serve in public office in Idaho when he was elected to Pocatello’s city council in 1973, and became the city’s first Black mayor in 1976. His effectiveness in those positions earned him a position in 1977 in Governor John Evans’s administration as director of Idaho’s Department of Administration. It was his appointment as the Director of the Department of Health and Welfare that deepened his ties to Idaho’s environmental work.

From air quality issues in Pocatello, to superfund issues on mines and lead contamination in Silver Valley, to orcas in the Puget Sound – Purce says he has been involved with environmental issues in nearly every phase of his career.

It began with his time on the city council of Pocatello with efforts to reduce pollution in the area. Then, Purce dove deeper into environmental issues as the director of Health and Welfare (prior to its creation in 2000, the Department of Environmental Quality was housed as a division within Health and Welfare).

A major project he worked on was cleaning up a legacy of lead contamination from mining in the Silver Valley – a federally-designated superfund site. Purce says this work opened his eyes to how deeply environmental issues were impacting Idahoans, and that understanding each stakeholder’s perspective on an issue is essential for solving the problem at hand.

“To see how personally it affected families in that community was pretty extraordinary,” Purce said. “To be there and see their faces, talk to people and tie people into the systems that can help them survive. That was, without a doubt, a very powerful and important time in my public service career.”

Purce later moved to Washington and became president of Evergreen State College, a school with a national reputation for its programs in sustainability and environmental stewardship. This position strengthened his ties to environmental work and kept him in the public eye.

Purce says that all these experiences prepared him for his position as co-chair of the Southern Resident Orca Task Force. The task force was created in 2018 by Washington Governor Jay Inslee after signing an executive order to prioritize protection of the southern resident killer whale population.

Purce and his co-chair, Stephanie Solien, identified and led representatives of nearly 50 government agencies, Tribes, coalitions and industry groups with an interest in recovering orca populations.

The task force drew international attention when people all over the world mourned with an orca named Tahlequah, who carried her dead calf for 17 days and 1,000 miles off the Pacific Northwest coast. Tahlequah was a member of the pod of Southern Resident Killer Whales, and the death of her calf was a significant blow to the pod.

Whale experts pointed to a lack of food as the culprit. Four years later, these orcas still face the same problem – but it’s gotten much worse.

The endangered Puget Sound orca population relies upon endangered Chinook salmon as their primary food source, but since neither wild nor hatchery salmon are in abundance in the Columbia Basin, the orcas are struggling. Billions of dollars have been spent to recover these fish, but recovery efforts have not succeeded, and salmon spiral towards extinction.

A passionate perspective: Looking ahead

Living in both Idaho and Washington has given Purce a broader understanding of salmon’s impact. It also showed him the solution: Breach the four dams on the lower Snake River and replace their services to ensure all communities are whole. 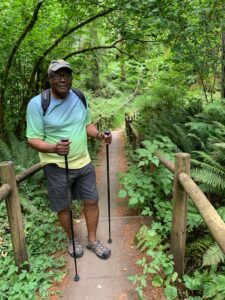 Purce’s memories of fishing in Idaho’s great outdoors put passion behind his perspective. This passion is easy to see when he’s telling a heartfelt story about fishing in Idaho – each tale is accompanied with a deep belly laugh and ear-to-ear smile.

“Some of my finest and most fun times have been on those rivers, fly fishing. I used to have a guide that knew where all the cutthroats were coming down the Middle Fork. ‘Alright, drop that fly over by that rock and let it drift into that hole, about a 16 incher oughta be in there’ he says. Bam! There’s ole Barney,” Purce recalls with laughter.

Although Purce still spends a lot of time in Idaho’s outdoors, he hasn’t had any new river memories like that in recent years, and neither have many of his friends. He says nearly everyone he’s talked to has noticed the decline in fish. These conversations have made this battle a personal one for Purce.

As salmon numbers continue to decline, urgency is mounting both nationally and within Purce to find a solution. “We owe that to all of our future generations to do everything we can do to ensure that this iconic species is able to survive,” Purce said. “Both for the salmon, and for the orca, that really is the canary in the mine.”

Together, we can all ensure that future generations have amazing river stories to tell, just like Purce. “I’m an outdoorsman and I’ve lived in every part of the state of Idaho. I’ve fished most of its rivers and hiked most of its hills and chased most of its elk,” Purce laughs. “I’m an Idahoan.”

If you’d like to be a part of this historic effort to save salmon, take action today!